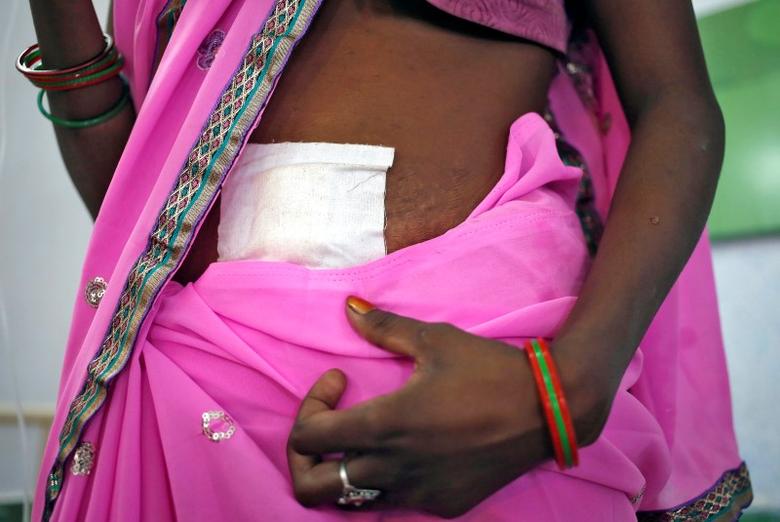 A woman, who underwent sterilization surgery at a government mass sterilisation ''camp'', walks to sit in a hospital bed at a district hospital in Bilaspur, in the eastern Indian state of Chhattisgarh, November 13, 2014. REUTERS/Anindito Mukherjee
By Suchitra Mohanty and Nita Bhalla

In a judgment on Wednesday, the Supreme Court said 363 women died between 2010 and 2013 during or after surgery in sterilization camps due poor management by local authorities which included doctors using dirty equipment and expired drugs.

It called on the federal government to ensure the country's 29 states and seven union territories halt the camps, provide adequate compensation for victims and their families, and hold negligent doctors accountable.

Activists have long campaigned for better regulation of sterilization camps - where women are gathered for mass surgeries to sever or seal their fallopian tubes - and more investment in alternative forms of contraception.

"We welcome the Supreme Court judgment which we consider a landmark one. Providing quality services to and upholding the dignity of women will now be placed strongly on the national agenda," said Poonam Muttreja, executive director of the Population Foundation of India (PFI).

"This judgment has the potential to shape India's family planning program into a program of national significance."

According to a study by PFI, 85 percent of the country's family planning budget for 2013/14 was spent on promoting and conducting sterilizations on women. Only 1.5 percent was spent on other forms of contraception.

The world's top sterilizer of women, India came under global scrutiny for its sterilization drive in November 2014 when 15 women died and scores of others were hospitalized after surgery at a sterilization camp in the eastern state of Chhattisgarh.

Investigations found the deaths in Bilaspur district were due to unhygienic conditions, dirty medical instruments and equipment and an overall lack of care for the patients who were poor tribal and low-caste women.

Authorities have put in place guidelines and are training health workers on conducting safe and sanitary surgeries, but incentivised, target-driven sterilization continue.

Doctors, nurses and health workers receive cash incentives for promoting and carrying out sterilizations. Patients are also given compensation - ranging from 600 rupees ($10) to 1,100 rupees ($17) for tubectomies and vasectomies respectively.

The Supreme Court ruling was in response to a civil petition filed by women's health activist Devika Biswas alleged widespread mismanagement at camps in various states.

The ruling mentioned how a doctor sterilized 53 women over a period of two hours "in an unprofessional and unethical manner" in a village school in the eastern state of Bihar in January 2012.

The sterilizations were conducted under torch light with the women laying on school desks, the surgeon did not have any gloves and there was no running water available, it said.

The patients, it added, were also not given any pre-operative tests, counseling and were not aware of the potential dangers and outcomes of sterilization.

"A sterilization surgery does not appear to be complicated and yet several deaths have taken place across the country over the years," said Justice Madan B. Lokur in his order.

"Undoubtedly, this needs looking into by the Government of India and the state governments and remedial and corrective steps need to be taken."