Israel: Stop the destruction of the villages of Atir and Umm al-Hiran and the expulsion of their inhabitants

We are writing to express our deep concern about the future of the Bedouin inhabitants of Atir and Umm al-Hiran, an ethnic minority in Israel, who are under imminent threat of forced eviction and demolition of their village.

The villagers have resided on the lands of Atir and Umm al-Hiran, located in the Northern Negev/Naqab area, since 1956, when they were relocated by direct order from the Israeli Military Governorfrom an area now known as Laqiya. This came after the villagers had already been forcibly moved by the military from their original home in Khirbet Zbala following the creation of Israel in 1948. 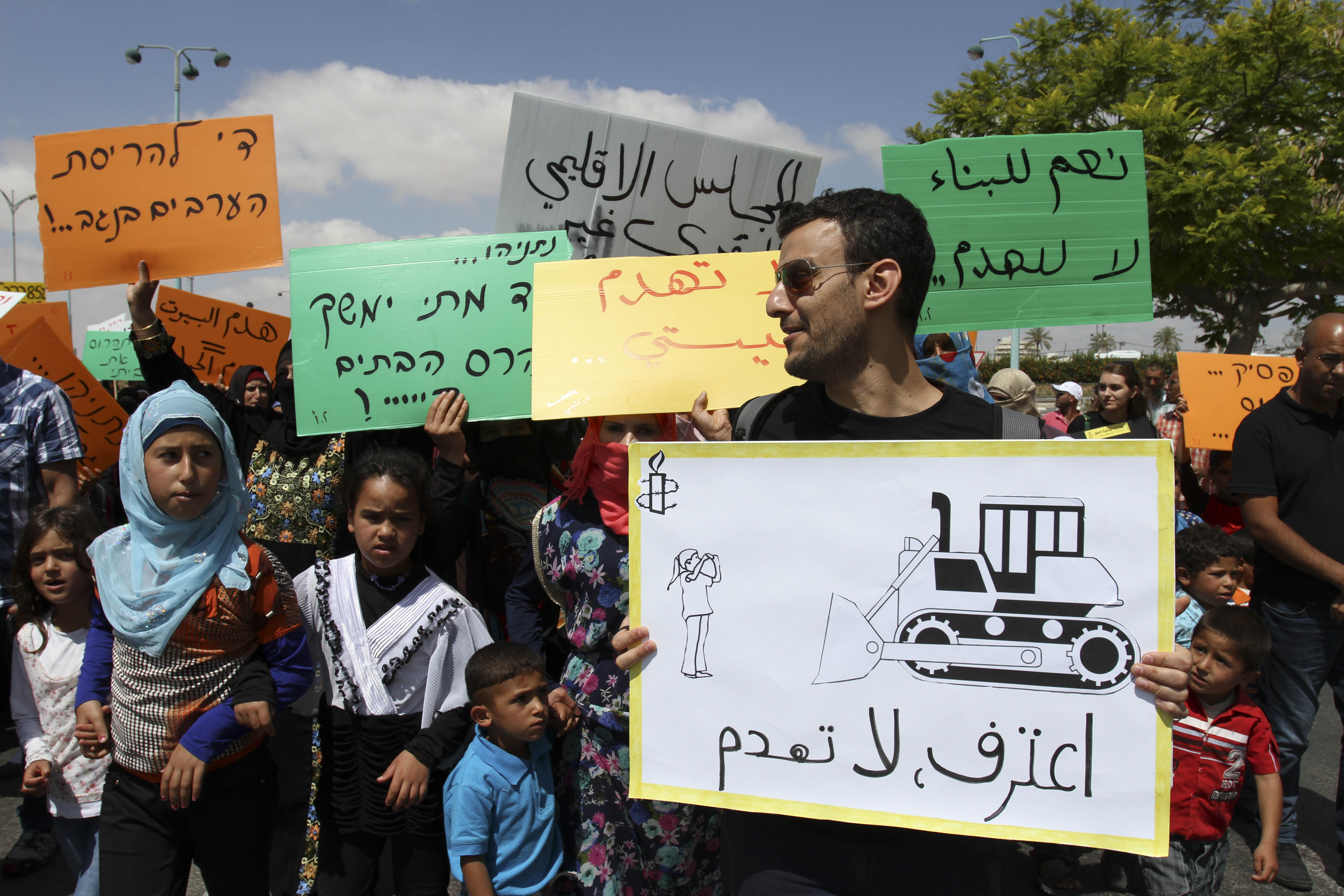 Now, sixty years later, it is reported that the Israeli Authorities are once again denying the rights to housing and non-discrimination for the residents of Atir and Umm al-Hiran. Despite the fact that they possess full Israeli citizenship, Palestinian citizens of Israel, including Bedouins, are often discriminated against in the field of housing.[1] In the case of Atir and Umm al-Hiran, we understand that the residents have been presented with an order of eviction that will be carried out in coming months in order to resettle Jewish citizens on the same land.

Under the current proposal, the residents would reportedly be forcibly relocated to the nearby Bedouin township of Hura in order to make way for the construction of the town of Hiran, which reportedly will only be accessible to Jewish citizens of Israel in practice; as well as to expand Yatir Forest, the largest forest in the Middle East. Contrary to the requirements of international law binding on Israel the residents have not been consulted at all about the proposed eviction and demolition. The UN Commission on Human Rights has confirmed that forced evictions are a gross violation of human rights, and the UN Committee on Economic, Social and Cultural Rights has affirmed that evictions are only permitted under specified conditions, including when affected people have had the opportunity for genuine consultation, adequate and reasonable notice, and the possibility of pursuing legal remedies. The Committee on Economic, Social and Cultural Rights has also expressed concerned that the relocation of Arab-Bedouin villages in new settlements will negatively affect their cultural rights and links with their traditional and ancestral lands, and recommended that Israel fully respect the rights of the Arab-Bedouin people to their traditional and ancestral lands.[2] 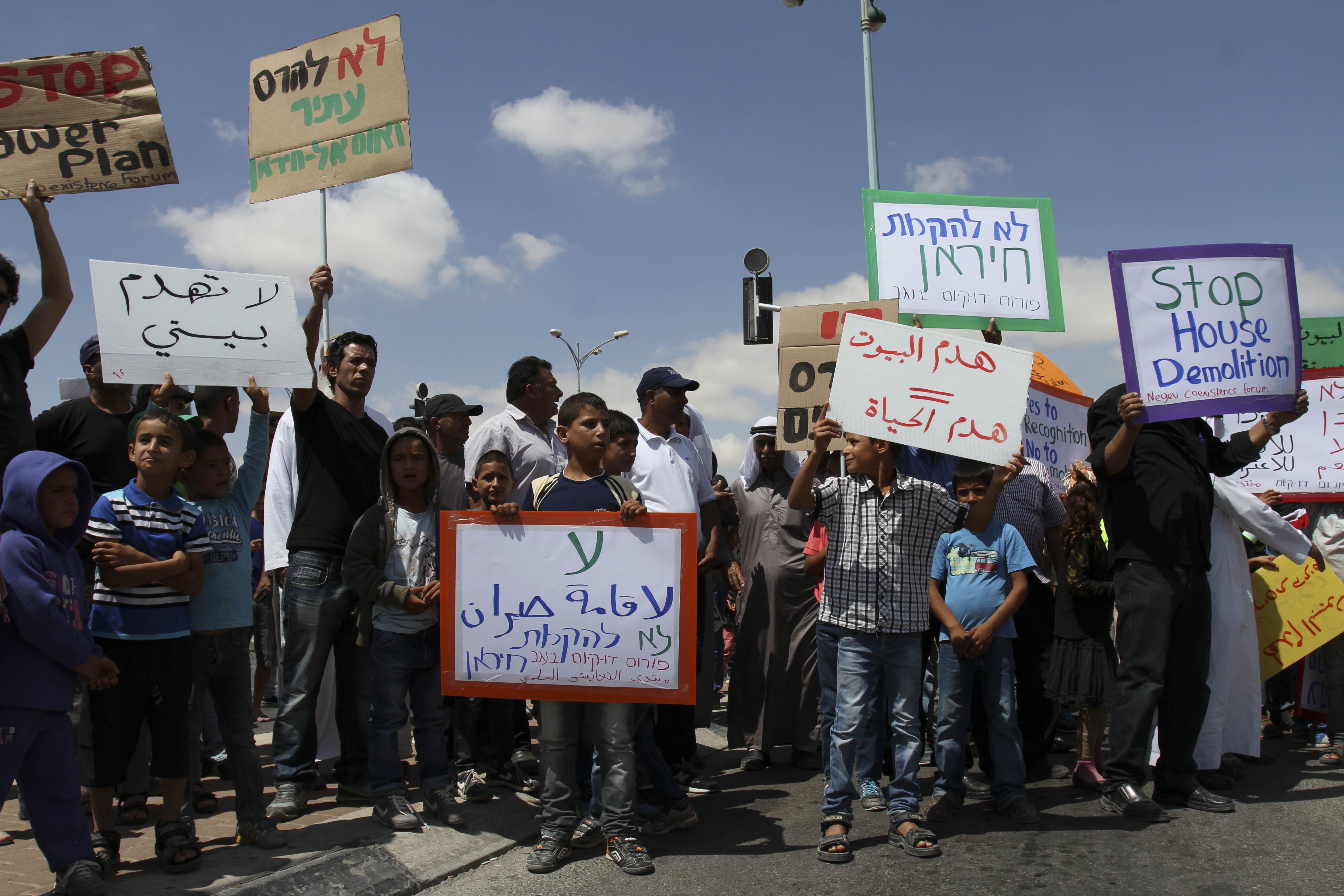 We wish to affirm that all people residing in Israel has the right to adequate housing – as guaranteed  international human rights law –and this should be respected without discrimination including on the grounds of ethnicity. However, we are concerned that the Israeli Government’s policy of displacement, forced eviction, house demolition and dispossession of ancestral land is resulting in devastating, discriminatory and disproportional, impacts on the fundamental rights of Palestinian citizens of Israel.

We furthermore understand that the Israeli authorities have refused to recognize dozens of Bedouin villages in the Negev/Naqab, including Atir-Umm al-Hiran, which remain disconnected from basic infrastructure, including running water, sewage networks and electricity. Israeli authorities have reportedly made reference to the lack of access to essential services as a means to justify forcibly relocating the residents to Hura. However, they have not attempted to consult with the communities about other options such as connecting existing villages to services. At the same time, Israel has also refused to consider recognize Atir-Umm al-Hiran, along with 36 other unrecognized Bedouin villages in Israel.[3]

We are deeply concerned that the current proposal infringes upon the basic right to an adequate standard of living of the Bedouin villagers, and that the Israeli authorities would be in breach of international human rights law were the proposed forced eviction and demolition to proceed as planned. We wish to remind the Government of Israel that the right to housing is a fundamental component of the right to an adequate standard of living as guaranteed under Article 11 of the International Covenant on Economic, Social and Cultural Rights (ICESCR), to which Israel is a party, and central to the enjoyment of other human rights, including protection against forced eviction, accompanying harassment and threats; guaranteed security of tenure, sustainable access to safe drinking water sanitation and other elements of the right to housing.  In addition, Israel is also party to the International Convention on the Elimination of Racial Discrimination, which prohibits discrimination on grounds of race and ethnicity in the exercise of various rights including the right to housing.

Article 17 of the International Covenant on Civil and Political Rights (ICCPR), protects against arbitrary interference with one’s home, privacy and family which has been held to include prohibiting forced evictions. Furthermore, as a State party to both the ICCPR and ICESCR, Israel is obliged to ensure that any person whose rights or freedoms have been violated under these treaties has the right to an effective remedy.

We, the undersigned, concerned that Israel is in breach of its human rights obligations in its treatment of the residents of Atir and Umm al-Hiran, and of its Palestinian citizens of Israel more generally, call on Israel to:

1)    Respect and guarantee the human rights of all persons within its jurisdiction without discrimination, including particularly vulnerable and marginalized groups such as persons of Palestinian and Bedouin descent, consistent with the above-mentioned international human rights treaties to which Israel is party.

2)    Refrain from carrying out forced evictions and demolishing homes, and respect the right to be protected from arbitrary interference with one’s home, privacy and family.

3)    Commit to not carrying out any evictions until appropriate safeguards and procedures are in place in line with international law including a provision for genuine consultation with all affected residents.

4)    Take concrete steps to progressively realize the right to adequate housing for all within a reasonable time, with measurable progress and to an extent consistent with the maximum available resources to include:

5)    Ensure access to effective remedy for violations of human rights, including compensation, housing and property restitution, guarantee of non-repetition and the availability of legal aid to those in need to be able to seek judicial or other redress.

The letter is also available in French, Spanish, Arabic and Hebrew.