December 10th, International Human Rights Day, marks the sixth anniversary of the adoption of the Optional Protocol to the International Covenant on Economic, Social and Cultural Rights (OP-ICESCR) by the UN General Assembly.

Our goal is that all people have the chance to claim their economic, social and cultural rights at the UN. Six years after the adoption of the OP-ICESCR, more than 187 million people worldwide can now bring a complaint to the United Nations Committee on Economic, Social and Cultural Rights (UN Committee on ESCR), regarding violations of their rights – such as housing, health care, food, water, education, among others - if they cannot secure justice in their home country.

While 162 countries have ratified the International Covenant on Economic, Social and Cultural Rights (ICESCR) and therefore have international legal obligations to respect, protect and fulfill economic, social and cultural rights (ESCR), only 17 of these countries have allowed individuals or groups of individuals under their jurisdiction to bring complaints directly to the UN Committee on ESCR by also ratifying the OP-ICESCR.

These seventeen countries have reinforced their commitment to ensure access to justice and accountability for violations of human rights recognized in the ICESCR. However, many countries and billions of people worldwide remain outside this system, leaving the distinct majority of the world´s population without access to an international remedy for violations of their ESCR. 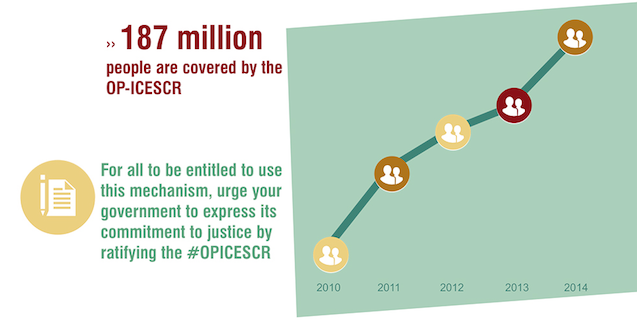 Please support the NGO Campaign for the OP-ICESCR, by directing a tweet to your government.You can utilize the graphics included in this message. You can also include the link to the document: Why states should ratify the OP-ICESCR?

You can also share the graphics on your website or Facebook profile and write to the press in your country to help spread information about this action:
@[press] do you know that 17 countries have already ratified the #OPICESCR to secure access to ESCR?

Thanks for being a part of this Campaign!