Collective Position on Data for Economic, Social, and Cultural Rights 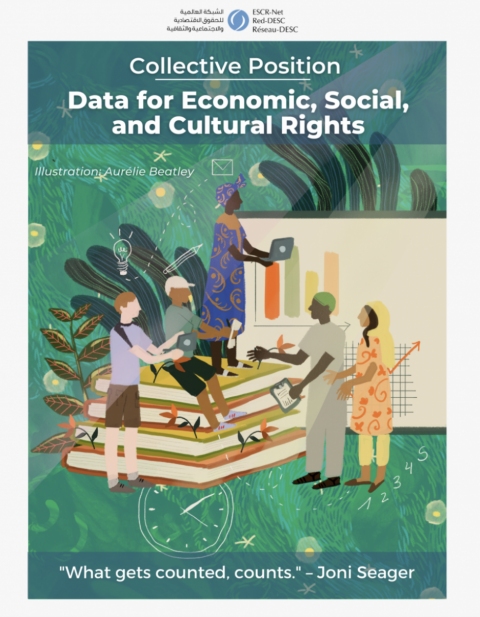 But there is a human rights data gap. As decision-makers and power holders increasingly rely on huge amounts of data to make policies and decisions about people’s economic, social, and cultural rights, we cannot assume that this data is neutral or objective. Nor can we assume that the right kinds of data are collected. States are failing to produce and use the right kinds of data necessary for the advancement of human rights—to the extent that states’ data practices sometimes pose a threat to human rights and reinforce existing inequalities.

Data processes such as the Sustainable Development Goals at the global level, censuses at the national level or environmental impact assessments at the local level tend to exclude affected communities and marginalized groups, which means they are unrepresented in data and have little say over what data is collected and how it is used. This is problematic because it renders entire subpopulations invisible to policy-makers and powerful actors, often resulting in further marginalization. There are countless examples. Women and girls are often absent in data—the gender data gap—which means that decisions are taken without taking into consideration the needs of women and girls, which in turn reinforces gender inequality. During the Covid-19 pandemic, many European countries failed to collect health data disaggregated by race, which meant they were unable to adequately respond to the needs of different groups. Even when relevant data is collected, it is often not made available to communities in ways that they can use it to participate in relevant decision-making processes, such as local development plans. And when communities decide to gather their own data to influence decisions that affect them directly, this is often disregarded as not objective and credible.

These examples are choices. Decision-makers choose to exclude groups and the things that are important to marginalized groups (whether intentionally or not) because of who has power and who does not. Our starting point for this collective position is, therefore, that data is inherently political. The first step in ensuring that data serves to enhance the enjoyment of human rights is to recognize this fact. Then, in order to remedy the problems with the current system, we must demystify and democratize data. Often, the role that data plays in decision-making is to replace difficult political conversations with choices masked as purely technical in nature, for instance, when powerful actors say it is too onerous to establish truly participatory decision-making processes or that it is too difficult to collect disaggregated data or even that lived experience is not valid information upon which decisions should be made. This allows those in power to sidestep confronting more systemic problems, such as inequality, racism, patriarchy, in which they may be implicated.

This is unfortunately not a new problem. Data has always been used by those in power to justify decisions that cement power over others. Well before the current era of global sustainable development, certain kinds of data—those considered “scientifically objective”—have been used to mask and justify more political motivations, such as the domination and silencing of people. Colonial powers claimed to collect “scientific” information about colonized people for the purposes of their ‘betterment.’ Today’s sustainable development regime continues to adopt a position on data that is paternalistic and dominated by powerful actors, who continue to exercise power through the control of information. By diminishing the knowledge and experiences of affected and marginalized communities and designating it as inferior information, it effectively further sidelines the very communities it purports to serve.

In addition, the digitalization of all aspects of our lives has brought enormous power to technology companies and further reduced the power and control people exert on data and information, with serious implications on public decision-making processes. Vast amounts of data about us are collected in our private and public life every time we use telecommunication devices, digital or biometric IDs, internet services, payment platforms, etc. States—and corporate elites—increasingly use this data, which is gathered for purposes very different from policy-making, to perform a number of public functions, from service delivery to resource allocation and law enforcement. However, commercially-produced data provides a partial picture of society, based on an understanding of people as consumers rather than as rights-holders, and should not be used as the only basis for public decision-making. And as states outsource important public functions, technology companies are given the ability to shape people’s access to services, markets and opportunities, without adequate oversight and accountability from the public. The result is a significant imbalance in power over public policies and practices, and therefore over people’s lives, which warrants urgent attention from human rights and social justice advocates.