In time for the International Women’s Day, women across the world reaffirm that they are a powerful force to be reckoned with as they collectively fight against oppression and break down systemic and structural barriers.

In the face of the pandemic, women in all their diversity – in the unions and factories, in farms and indigenous communities, in urban poor centres, in structured organisations or informal movements – continued to mobilise and put themselves at the forefront of the fight against COVID-19. While continuing their ongoing, and the  struggle against the deepening political and socio-economic crises inherent to a patriarchal, colonial, racist and imperialist system.

Despite governments' failed responses and lack of accountability, globally, women demonstrated their resistance against rising authoritarian and militaristic pandemic responses by leading initiatives for their communities. Women have led community kitchens and pantries, and provided meals and aid to poor, jobless, and neglected individuals within their communities. They responded to the needs of women who were subjected to various forms of violence, all the while defending themselves from unabated attacks. Indigenous women defended their ancestral lands amid intensified militarisation during lockdowns. Women human rights defenders face violence perpetrated by state forces and large corporations.

Even in the face of multiple crises, women have resisted and flourished. Through collective action, we remain and continue to strike. 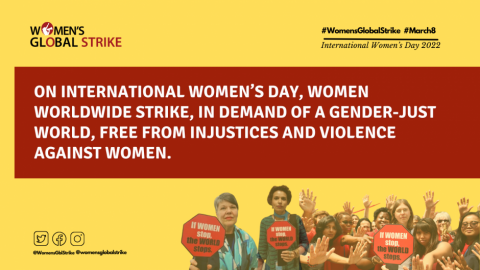 We strike for universal access to quality and people-centred public health care systems, and vaccine equity for all countries.

The pandemic exposed the gaping inadequacies of commercialised, privatised, and urban-centric health care and responses. Trade rules and investment treaties designed to benefit multinational corporations to gain profit at the expense of public health must end immediately. Feminists across the world support the call to end corporate capture and to put in place a waiver on the Trade Related Aspect of Intellectual Property Agreements (TRIPS) of the World Trade Organisation (WTO) on all medicines, medical devices and other medical products. Trade rules that impose corporations' interests and undermine the capacity of the states to protect public health must also be suspended.

We strike for the urgency of a new and fairer social pact on care.

It has been too long that women are coerced into old, unjust and still prevalent patriarchal structures that naturalises care as women’s sole responsibility in society. As this crisis has exposed, care is at the very centre of our societies and economies -- yet remains mostly unrecognised and invisible as well as increasingly privatised and commodified as a source of profit for corporations. A feminist and rights-based social pact on care can only happen when economic activities no longer rely on devaluation of women’s work as a source of competitive advantage. Through this new pact on care, we call on governments and other stakeholders to redistribute, reduce and recognize care, to ensure to ensure the full and effective participation of caregivers and community-based care networks in decision-making on care policies, to guarantee the rights of paid and underpaid care workers, make care a question of rights and not a question of privilege, and to create care central solutions or alternatives to the current economic model, taking into consideration how care is understood in different contexts.

We strike for safe working conditions, decent work and living wages for all women workers.

Even before the pandemic hit, millions of women workers in both formal and informal sectors, including domestic workers and women migrant workers, have been confronted with violence in the workplaces, poor wages and precarious working conditions. The COVID-19 pandemic has only exacerbated the already dire situation of women workers across the globe. Women have suffered disproportionate job and income losses because of their over-representation in the hardest-hit sectors, such as accommodation and food services, and the manufacturing sector. Feminists call on governments to ensure that women workers, including those with disabilities, women migrants, immigrants and refugees, including undocumented migrants, are provided with wage subsidies and economic relief packages, guaranteed of living wages, universal social protection and other benefits, and are protected from all forms of violence in their workplaces.

We strike for local, community-based food systems, women’s rights to land and resources, and food sovereignty.

The pandemic further exposed the weaknesses of a food system that is dominated by imperialist powers. Food insecurity and hunger are at an unparalleled height as land and domestic resources are continuously plundered and exploited for corporate gain. Amid all these, grassroots women activists stood up and demonstrated their resistance to the dominant food system by developing alternatives and asserting local, community-based systems which cater to local food needs and food self-sufficiency. These food systems should be protected and promoted in place of the corporatised global food system, and women’s rights to land and productive resources must be ensured, as it is critical in realising women’s human rights, and in achieving equitable and sustainable food systems. Likewise, food sovereignty, or the self-determination of communities on food production and resource use, including agroecological practises, must also be achieved in order to guarantee the peoples’ right to safe, nutritious, and culturally appropriate food. We also call for the respect, protection, fulfilment and promotion of the right to land of peasant and indigenous women, including the right of Indigenous Peoples to free, prior, informed and continuous consent, as well as wider rights related to housing, land, food and livelihood for all women.

We strike for feminist climate and biodiversity solutions that protect the environment and women’s rights and livelihoods.

Profit-oriented false climate solutions, fueled by capitalism and oppressive systems, have favoured large-scale development, perpetuating oppression of women through land grabbing. They have also strengthened authoritarian governments and militarism in rural and indigenous communities. We must use this opportunity to deliver a just and equitable transition away from a consumption-based, extractive and exploitative economy to a just, sustainable and care-based socio-economic model focused on the needs and rights of communities. This requires ending fossil fuel energy dependence and building energy democracy. It also requires to analyse the gender-specific impacts of climate change and to ensure the active participation of women in the design, implementation and evaluation of climate change initiatives.  It is time for a new, sustainable social contract that puts a stop to the climate, pollution and biodiversity crises, the health crisis and the crisis of inequalities.

We strike for a gender-just world that is free from oppression, injustices and violence against Women Human Rights Defenders.

Women human rights defenders are at the forefront of the fight against impunity and oppression, challenging oppressive systems and denouncing injustices. Their formidable work and dedication to uphold the fight for development justice made them targets of threats and violence. Thousands of women human rights defenders are harassed, vilified, arrested, disappeared, and killed across the globe. They face retaliation from within their own communities, organisations and close environments for speaking up and challenging patriarchal norms. Political persecution and criminalisation of dissent must end. Likewise, perpetrators, including governments and state forces, must be held accountable for these attacks.

The lingering impact of the COVID-19 pandemic underscored the fact that women move the world, and that productive and reproductive work is dependent on women. Women, as demonstrated by their assertions and resistance, are aware that activist  struggle is imperative in putting an end to the crises brought about by imperialist capitalism, racism, fundamentalism, militarism and patriarchy. As it is only when inequalities of wealth, power and resources between countries, between the rich and the poor, and between all genders are dismantled that women are truly free and women's human rights are achieved.

Thus, on this International Women’s day, we celebrate the billions of women who continue to raise our voices, strike down barriers, and call for collective action and solidarity to work towards making development justice a reality for all. Now more than ever, we reaffirm that if women stop, the world stops.