The Supreme Court of the United Kingdom (UK) struck down a Fee Order (necessitating the payment of fees to pursue claims) imposed by the government in employment tribunals and the employment appeal tribunal as unlawful under both domestic and EU law, as it prevented access to justice. This case has significant positive implications for workers’ rights, gender equality, as well as the human right to an adequate standard of living, and strengthens the rule of law. 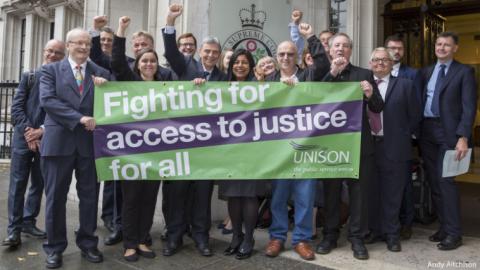 Prior to the enactment of the Employment Tribunals and the Employment Appeal Tribunal Fees Order 2013 (Fees Order) in the UK, a claimant could pursue and appeal employment proceedings without paying any fee. Fees were introduced under the Fees Order, with the amount varying depending on factors including the claim classification and complexity. Type A claims (£390 fee) generally required less time to resolve. Type B claims (£1,200) included unfair dismissal, equal pay and discrimination claims. They generally required more judicial case management and longer hearings because of their legal and factual complexity. This meant fees were higher for complex claims irrespective of the amount of relief sought.

The trade union UNISON (the appellant), supported by the Equality and Human Rights Commission and the Independent Workers Union of Great Britain as interveners, challenged the legality of the Fees Order before the Supreme Court. They argued that the fees unjustifiably interfered with the right of access to justice under both the common law and European Union (EU) law, impeded statutory employment rights, and discriminated against women and other protected groups.

The government argued that the fees were lawful because there was no conclusive evidence that someone had been denied access to the courts due to inability to pay. It considered the fees affordable because poor people qualified for full fee cancellation and others had the disposable income to pay. Rejecting these arguments, the Court confirmed it does not require ‘conclusive evidence’ to determine denial of access to justice. It is sufficient if a real risk is demonstrated, and the Court inferred from the sharp, substantial, and sustained fall in the number of claims that a significant number of people who would otherwise have brought claims found the fees to be unaffordable. The discretionary fee cancellation was deemed inadequate as the problems identified were systemic rather than confined to exceptional circumstances. It further held that it is not only unaffordable fees that prevent access to justice, but also circumstances where fees would render it futile or irrational to bring a claim. Significantly, the Court found that the fees cannot be regarded as affordable “[w]here households on low to middle incomes can only afford fees by sacrificing the ordinary and reasonable expenditure required to maintain what would generally be regarded as an acceptable standard of living.”

The Court determined that even an interference with access to the courts which is not insurmountable will be unlawful unless it can be justified as reasonably necessary to meet a legitimate objective. There were three justifications given for the impositions of fees. First, that fees would shift some of the cost burden from taxpayers to those who used the system. Second, to disincentivize pursuing weak or vexatious claims. Third, to encourage earlier settlements. On the available evidence, the Court rejected each justification.

Amongst other legal references, the Court drew at the domestic level on the constitutional right to unimpeded access to the courts and at the regional level on the norm of effective judicial protection as enshrined in the European Convention on Human Rights and reaffirmed by the Charter of Fundamental Rights of the European Union. Ultimately, the Court found the Fees Order unlawful under both domestic and EU law for having the effect of preventing access to justice, and ordered it quashed.

The Court also found the Fees Order to be indirectly discriminatory under Section 19 of the Equality Act 2010 because the higher fees for certain (i.e. Type B) claims put women and others with protected characteristics, who bring a higher proportion of such claims, at a particular disadvantage.

The government’s Justice Minister announced that fee collection would be halted immediately and that the government would commence with a reimbursement process with respect to all fees paid since 2013. While a figure of approximately £30-35 million is being quoted, precise details surrounding the rebate are unclear as of now.

This momentous decision has been celebrated as championing access to justice for workers. It is a rich and nuanced landmark judgment which addresses multiple issues vital to human rights discourse, including a decent standard of living, securing workers’ rights, access to effective remedies, gender equality and the importance of protecting the rule of law. The decision acknowledges the skewed power dynamics at play between workers and their employers and, in strongly upholding unimpeded access to courts and tribunals, emphasizes that in order for rights to be effective, they must be enforceable in practice.

The right to an adequate standard of living is a core human right under the International Covenant of Economic, Social and Cultural Rights. It is particularly relevant that the Court applied minimum income standard research to support its finding that in specific cases workers faced unjustifiable decisions between a decent standard of living and access to justice. This judgment demonstrates that discourse concerning decent standards of living is impacting judicial and administrative decision-making, and by extension, public policy in the UK. The decision also emphasizes the need to safeguard access to justice. For the realization of human rights, the availability of effective judicial remedies is essential. Indeed access to justice is a fundamental principle of human rights law. Another significant outcome is the elevation of the issue of indirect discrimination against women and others with protected characteristics, and the strong position on equality.