New report challenges the consequences of privatisation of education in Chile 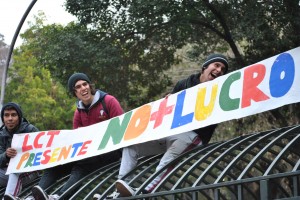 In a report made public on December 4, the Global Initiative for Economic, Social and Cultural Rights (GI-ESCR), the Chilean Forum for the Right to Education (FORO), the Latin-American Campaign for the Right to Education (CLADE), the Sciences Po law school Clinic and the Privatisation in Education Research Initiative (PERI) called on UN human rights experts to question the government of Chile about the human rights violations resulting from its privatised education system.

Chile has the fourth highest proportion of private primary schools in the world, more than three times higher than the average among member countries of the Organisation for Economic Co-operation and Development (OECD). This situation is the consequence of neo-liberal economic reforms conducted under the Pinochet regime in the 1980s and reinforced by the following Governments.

Yet, Chile’s education system is the most segregated between richer and poorer households, according to data from the OECD comparing 65 countries. The report demonstrates that this system is highly discriminatory on the socio-economic ground, in violation of international human rights standards the country is bound by.

“This is not only an unacceptable system, which most impacts marginalised, vulnerable and poor people, and perpetuates high levels of inequalities, it is also a very unjust system, which affects the cohesion of the society as a whole, and which is illegal by international standards” indicated Camilla Croso, CLADE’s general coordinator.

Fees charged to parents by both primary and secondary private schools are one of the main factor of socio-economic discrimination, and can be used by schools to exclude certain undesired students. In 2012, one of the best private schools charged 690 USD per month, almost twice the monthly minimum wage. In addition to this selection on the basis of fee, direct selection of students, such as entrance examinations or behavioural tests, is a common practice.

“The current level of inequalities with regards to the right to education is unsustainable, and this was the core of the protests that took place in 2006 and 2011 in the country. While the authorities have promised to address this situation, the parliament and the Government must act quickly and put at the core of the reforms the human rights impact of education policies so as to re-design a system which is in line with its international obligations, in particular by forbidding State money to subsidise profit-making private schools” added Rene Varas, the coordinator of FORO.

In order to inform this discussion, the report was sent to the United Nations Committee on Economic, Social and Cultural Rights (CESCR), ahead of the review of Chile by this Committee of experts in June 2015. The CESCR will assess the respect by the Government of various economic and social rights, including the right to education. It is meeting in a pre-session during the first week of December, following which it will issue a “list of issues”, including questions which the Government will have to respond to in writing.

“No State has been as far as Chile in terms of privatisation of education, and so the Chilean system informs us about the long-term impact of privatisation. If the CESCR raises issues about the education system in Chile, it would also send a strong signal to other countries, at a time where many States are privatising their education system and shying away from their responsibilities” indicated Lucy McKernan, the UN Liaison with the GI-ESCR.

Several UN human rights bodies, including the UN Special Rapporteur on the Right to Education, have recently questioned the growing privatisation in education in the world, and called on reinforcing the role of the State and protect education as a “public good”.

Summary of the report available on http://globalinitiative-escr.org/?p=1712