After a visit to the Peruvian regions of Cajamarca and Cusco in February of this year, Front Line Defenders has released a report on the current conflicts between mining companies and the defenders of the rights of peasants and indigenous people in Peru. The report is based on field research and interviews with independent human rights defenders and civil society. Front Line Defenders has also been produced a 12-minute video on the report.

In the report, Front Line Defenders expresses its deep concern regarding the situation of human rights defenders (HRDs) working on human rights and environmental issues related to the extractive industries in Peru. Front Line Defenders has found that HRDs in Peru often live and work in a very tense situation and have been the direct target of intimidation, death threats, physical attacks, surveillance, stigmatization, smear campaigns, and judicial harassment. All these documented instances appear to be directly related to legitimate and peaceful work carried out by the HRDs concerned, in particular in supporting the local communities opposed to mining projects and their impact on their environment, territory and livelihood. 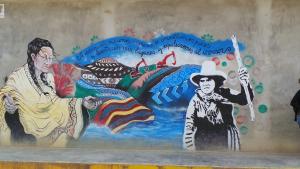 “Front Line Defenders has noted with deep concern a trend across the region of governments trampling over the rights of local and indigenous communities and of those defending them in their rapacious search for raw materials and profit. The Government of Peru has an obligation to respect the rights of all its citizens and to protect those brave human rights defenders who speak out on their behalf” said Front Line Defenders Deputy Director Andrew Anderson, at the launch of the report.
Peru is one of the largest producer of silver and copper in the world and the 5th largest producer of gold. The government has granted mining licences for huge areas of the national territory extending to 45% of the territory of Cajamarca province and 21% of the territory of Cusco province. These projects have brought the authorities and mining companies into conflict with indigenous and campesino communities who exist on the basis of subsistence farming and whose way of life and well-being have been undermined. Local communities are particularly concerned about access to water, as rivers have been polluted and water courses have dried up.
Intense local opposition to mining has been met with a violent response by the state and excessive use of force by the police and the army in dealing with protests and demonstrations. Of particular concern is the adoption of a law in January 2014 that granted to the armed forces and the national police immunity from prosecution for death or injuries caused while on duty.
400 protesters and HRDs are currently facing prosecution on the basis of charges lodged by the mining companies, their staff or the public prosecutor. In many cases these charges are nothing more than a form of judicial harassment in that there is no evidence to back them up. Mr Milton Sanchez of the Plataforma Interinstitucional Celendin has had 50 court proceedings but has never been convicted. However these spurious proceedings take up valuable time and resources and distract from the core work of the organisation.
Many of the environmental HRDs Front Line Defenders interviewed constantly expressed their feelings of fear at living under constant threats, as well as the daily stress of expecting to find another notice on their homes, or that they will receive notice of another lawsuit.
The report can be read in full here.
Source and more info: http://www.frontlinedefenders.org/
Working Group(s):
Corporate Accountability
Social Movements & Grassroots Groups
Thematic focus:
Corporate Accountability
Indigenous Peoples' Rights
Related Members:
Front Line Defenders (The International Foundation for the Protection of Human Rights Defenders)
Country:
Peru