In anticipation of the second anniversary of the entry into force of the Optional Protocol to the International Covenant on Economic, Social and Cultural Rights (OP-ICESCR) on 5 May 2015, the NGO Coalition for the OP-ICESCR attended the 56th Ordinary Session of the African Commission of Human and People´s Rights in Banjul, The Gambia, to continue fostering the OP-ICESCR Ratification Campaign.

In partnership with the African Commission and together with its members Community Law Centre, Hakijamii, Kenya Human Rights Commission, ESCR-Net, and FIDH, the NGO Coalition held a panel on the Role of the Optional Protocol to the ICESCR in Securing Access to Justiceon 23 April, during the morning session. Over 150 people, among them, States representatives, Commissioners, representatives of NHRIs and other inter-governmental organizations, as well as members and partners from civil society organizations, attended the event.

With this panel, the NGO Coalition aimed to strengthen the recognition of the OP-ICESCR as a powerful tool for civil society and governments alike in securing justice for violations of economic, social and cultural rights and guiding the fulfillment of the rights in line with existing State obligations.

Significantly, three African States have already ratified the OP-ICESCR—Niger, Gabon and Cabo Verde—and several have signed the treaty, expressing intent to ratify.  In addition, South Africa recently took an important step by ratifying the ICESCR.  In 2012, the African Commission passed a resolution calling on countries in Africa, to ratify the ICESCR and the OP-ICESCR, as complementary to regional human rights standards and mechanisms. 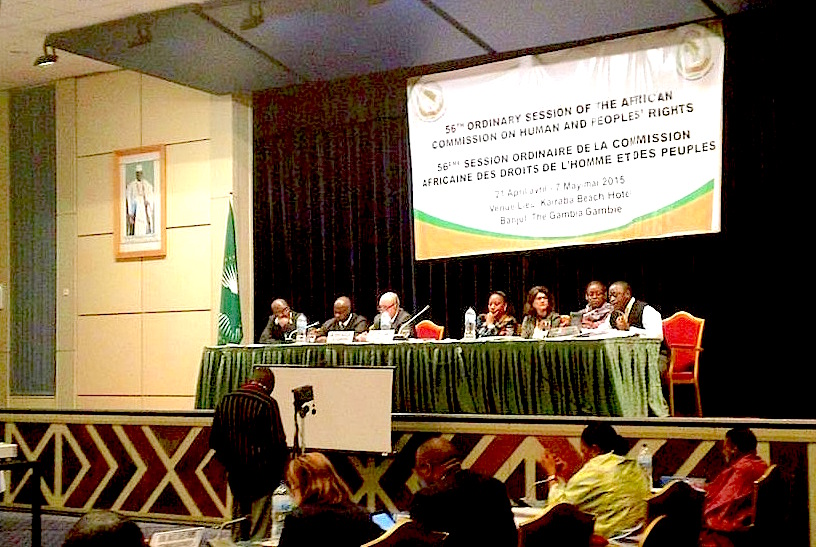 Below, we are happy to share the presentation made by Andrew Songa, from the Kenyan Human Rights Commission (KHRC), during this event:

Ratification of the OP-ICESCR as an Opportunity for Complementarity in the Advancement of Economic, Social and Cultural Rights, by Andrew Songa[1]

1.     International and regional human rights mechanisms play a critical role in fostering consensus that would see States protect and observe human rights in a holistic, just and balanced manner as required by the Vienna Declaration and Programme of Action.

2.     The Optional Protocol to the International Covenant on Economic, Social and Cultural Rights (OP-ICESCR) provides an opportunity to further such global consensus in the realization of Economic, Social and Cultural Rights (ESCR). By providing for a complaints and inquiry mechanism for ESCR, it can provide much needed clarity on the content of ESCR in different contexts and provide the much needed guidance for States seeking to fulfill their obligations in this respect.

3.     This is particularly critical for some African States such as Kenya that have only recently expanded their Constitution’s Bill of Rights to include ESCR. It is equally critical for African States that are at the epicenter of an increased global demand for the continent’s natural resources which has in turn introduced new challenges to the realization of the rights to housing, food, water and healthcare.

4.     The availability of a platform for processing grievances and inquiries on the realization of ESCR such as the OP-ICESCR therefore provides States with avenues for critical reflection that can help them develop their normative standards. In this respect, African States have already benefited from such guidance through the work of the African Commission on Human and Peoples’ Rights (ACHPR) in carrying out its promotional and protective mandates.

5.     Kenya for example, benefited greatly from the guidance offered from the ACHPR’s decision in the Endorois Case at a time when the Constitution did not address ESCR. In relying on Kenya’s obligations under the African Charter on Human and Peoples’ Rights (African Charter), the ACHPR affirmed the Endorois’ rights to practice culture and religion on their ancestral lands and expounded on the right to development as involving consultation and obtaining free, prior and informed consent. To quote the decision, “The right to development is a two-pronged test……it is useful as both a means and an end…..it is not simply the State providing, for example, housing for individuals or peoples, development is instead providing people with the ability to choose where to live….” The emergence of such jurisprudence at a time when Kenya was drafting its current Constitution served as a compelling argument in the formulation of our current provisions on ESCR and their specific application for marginalized communities.

6.     The ACHPR’s decision in the Serac Case provided critical insight to the State’s duty to protect citizens from damaging acts perpetrated by private parties along with ensuring the right to the best state of physical and mental health, a clean environment, property, natural resources and adequate housing. Again, to quote the decision, “Governments have a duty to respect citizens, not only through appropriate legislation and enforcement, but also by protecting them from damaging acts that may be perpetrated by private parties….The right to food is inseparably linked to the dignity of human beings….essential for the enjoyment and fulfillment of other rights as health, education work and political participation…”

7.     In reflecting on these decisions by the ACHPR and the prospects for the communications procedure introduced by the OP-ICESCR, it is clear that there is an opportunity for complementarity in the descriptive sense[2]. By this I mean the potential of establishing relations that would contribute to advancing ESCR on the basis of institutional solidarity and cooperation. The body of jurisprudence from the ACHPR already presents peer learning opportunities.

8.     Such relations have already been established and continue to be established with other UN mechanisms such as: the Human Rights Committee (HRC), Universal Periodic Review (UPR) and Special Procedures such as various Special Rapporteurs. In Kenya’s case for example, such cooperation has proved critical mutually reinforcing some of their respective recommendations and in furthering the cause of enforcement for some of the decisions of the ACHPR.[3]

9.     In closing, I would like to encourage African States to ratify the OP-ICESCR in a bid to advance the global consensus on operationalizing ESCR and as a demonstration of good intent to its citizens of their intent to realize these rights.

[1] Programme Manager, Transformative Justice at the Kenya Human Rights Commission (KHRC). Paper presentation during a panel at the 56th Ordinary Session of the African Commission on Human and Peoples’ Rights (ACHPR)- April 23, 2015 at the Kairaba Hotel in the Gambia

[3] The Human Rights Committee in its 2012 Concluding Observations for Kenya’s third review made reference to the Endorois Case while the ACHPR and the UN Special Rapporteur on the Rights of Indigenous Peoples have issued a Joint Communique calling for implementation of the decision.