There are eight States Parties of the Optional Protocol to the International Covenant on Economic, Social and Cultural Rights (OP-ICESCR) and 41 Signatories, with the signature of Burkina Faso on September 24, 2012.  This new mechanism for justice will enter into force with just two more ratifications! See: http://treaties.un.org/Pages/ViewDetails.aspx?src=TREATY&mtdsg_no=IV-3-a&chapter=4&lang=en.

To ensure these ratifications happen quickly, the NGO Campaign for Ratification of the OP-ICESCR and its partners have carried out activities in diverse parts of the globe since the beginning of 2012.  The NGO Coalition has facilitated national dialogues in Mexico (with ESCR-Net, Espacio DESC, Habitat International Coalition-América Latina, and Campaña Mexicana por la Ratificación del PF-PIDESC), Tunisia (with Fédération internationale des droits de l'Homme, Forum Tunisien pour les Droits Economiques et Sociaux, and International Commission of Jurists) and Uruguay (with Amnesty International-Uruguay, Instituto de Estudios Legales y Sociales del Uruguay, and Plataforma Interamericana de Derechos Humanos, Democracia y Desarrollo-Uruguay) and regional dialogues in Africa (with the Socio-Economic Rights Institute) and South Asia (with Dignity International), where we were able to share resources and strategize with partners in order to envision together how to push for ratification in each region. In Mexico, we are working with a coalition of partners to advance ratifications of the OP-ICESCR through specific actions. In South Africa, we had the opportunity to work together with more than 35 lawyers and human rights defenders from across the region and learn more about opportunities and obstacles in each country. We agreed on the necessity of building an African network to support OP-ICESCR ratification, and we continue to outreach and strategize to build that network.

Following these national and regional dialogues, several follow-up actions have been initiated:

Following the dialogue in South Africa, the participants decided to organize an event before the African Commission on Human and Peoples Rights. This led to Protecting Economic, Social and Cultural Rights- Why the OP-ICESCR is so important for the African States, an event co-organized with FIDH and AI and involving the participation of several Commissioners. Together with the Civil Society Forum held on the occasion of this session of the African Commission, a request for a statement in support of the OP-ICESCR was sent to the Commissioners. This request was accepted by the Commissioners, who released a Resolution on the Optional Protocol to the International Covenant on Economic, Social and Cultural Rights (http://www.ACHPR.org/sessions/51st/resolutions/223), urging “States Parties to the African Charter that have not done so to ratify the International Covenant on Economic, Social and Cultural Rights, and the Optional Protocol to the ICESCR.”

Together with our local partners Amnesty International-Uruguay, Instituto de Estudios Legales y Sociales del Uruguay (IELSUR), and Plataforma Interamericana de Derechos Humanos, Democracia y Desarrollo-Uruguay (PIDHDD-UY), we conducted a public event with national and international speakers and a workshop for civil society actors and academics, where they developed strategies for advocacy and litigation (July 16-17, 2012). Among the speakers at the public event, Senator Carlos Baráibar committed the support of his party to the ratification. 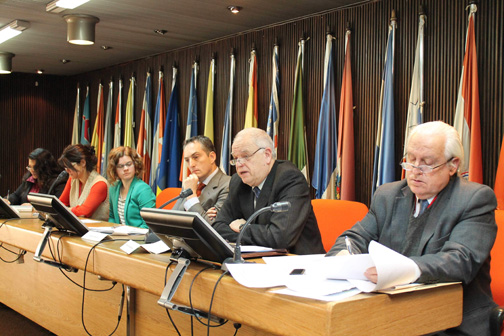 In addition, the NGO Coalition has been advocating at MERCOSUR, the regional common market body involving Argentina, Brazil, Paraguay, Uruguay and Venezuela, with a strong presence at the Meeting of High Level Authorities on Human Rights in December 2011, as well as follow-up actions in March in Buenos Aires.

Asia is a vital region for securing ratifications and implementation of the OP-ICESCR. In order to connect more advocates with this international campaign, we developed a one day session on OP-ICESCR as part of a Dignity International training program developed for the South Asian region between July 22 and 29. We look forward to continuing to work with these colleagues and their organizations to advance the OP-ICESCR and strengthen ESCR in the region. 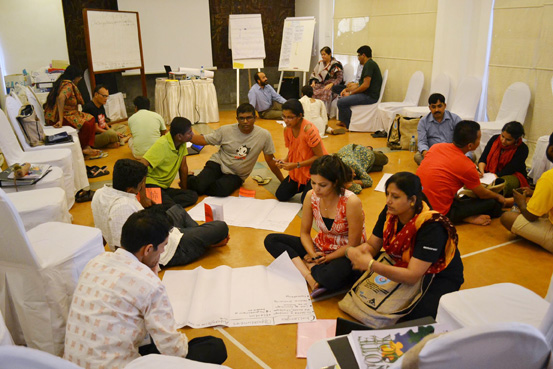 Participants in a session on the OP-ICESCR, working in group.

Your  experience, commitment, and contributions are welcome and needed. Please consider joining the International NGO Coalition for the OP-ICESCR. Contact us at op-coalition@escr-net.org

Visit here to access the OP-ICESCR Ratification Toolkit, which offers background on the history of the OP-ICESCR, strategies for seeking ratification within your country, and information on content of the treaty. The booklets are currently available in Arabic, English, French, Spanish, and will soon be available in Portugese.

For more information on how to get involved, contact Ivahnna Larossa ilarossa[at]escr-net.org

Strategic litigation on economic, social and cultural rights (ESCR) has continued to develop as a strategic focus and critical area of engagement for the Adjudication of ESCR Working Group. This initiative allows ESCR-Net and members of the Adjudication Working Group to continue to promote and support litigation which builds strong jurisprudential standards on the scope and obligations related to economic and social rights. The aim of this work is to support strong cases domestically and internationally which can contribute to the scope and content of ESCR, and also the OP-ICESCR, to increase access to justice for ESCR violations. This includes supporting four cases before United Nations treaty bodies on ESC rights; increasing awareness and capacity to use the OP-ICESCR; developing a transnational research and advocacy agenda on implementation of the ICESCR; facilitating mutual learning from developments in different jurisdictions and advocating for implementation of key ESCR cases. This Initiative is lead by a steering committee composed of Bruce Porter (SRAC, Canada), Cesar Rodriguez (Dejusticia, Colombia), Malcolm Langford (NCHR, Norway), Jackie Dugard (SERI, South Africa), Julieta Rossi (Independent, Argentina) Bret Thiele (GI-ESCR, US) and Iain Byrne (Amnesty, UK).  A group of experts from around the world has also been composed to support aspects of this project.

ESCR-Net, the Socio-Economic Rights Institute of South Africa (SERI), the NGO Coalition for the OP-ICESCR and the Norwegian Center for Human Rights (NCHR) convened a three-day workshop in Johannesburg, South Africa (March 12-14, 2012), to share litigation and enforcement strategies which centrally involve affected groups and social movements, as well as integrate strategies for enforcement in national, regional and international spheres. Bringing together almost 50 human rights lawyers, activists and social movement groups from 14 countries in Africa, as well as different parts of the world, the Workshop had the following objectives: (1)  examine ways to improve the justiciability and judicial acceptance of ESCR in Africa; (2)  discuss lessons learned in enforcement of judgments and identify cases which could be supported for implementation through regional and international advocacy; (3) build regional support and develop strategies for OP-ICESCR ratification; and (4) provide space for discussion of litigation strategy, including how affected groups and social movements can be more central and national litigators can utilize regional and international solidarity and networking.

Key outputs of this event include a follow-up workshop on enforcement in Kenya and the selection of African cases to be supported by the Adjudication Working Group. Other potential outputs involve support for bottom-up strategies for ESCR litigation in places where direct international support is unwelcome, support of ESCR-related discussion in constitutional processes, production of materials on strategic litigation, and capacity building initiatives.

ESCR-Net, the NGO Coalition for the OP-ICESCR, and Espacio DESC held a two-day National Dialogue in Mexico City, on February 3 and 4, 2012, bringing together approximately 40 lawyers from all over the country, as well as UN and international experts, to achieve the following objectives: (1) support conditions and cases for litigation before UN treaty bodies on ESC rights, particularly focused on marginalized groups; (2) take active steps to support ESC rights claims on a collective basis; and (3) support to increasing awareness for the ratification of the OP-ICESCR in Mexico.

The Adjudication Working Group’s Strategic Litigation Initiative (SLI) was able to hold meetings in Spain, Ecuador and Bosnia, in March and late July 2012, through member organizations CESCR, Observatori DESC, DeJusticia and Amnesty International, in order to map and identify potential cases to be presented before the Committee on Economic, Social and Cultural Rights under the OP-ICESCR, as the three countries have ratified the treaty.

The Adjudication Working Group has undertaken a first round of outreach to identify lawyers based in different regions of the world, covering diverse legal systems and ESC rights-related issues, who can provide pro bono input and support to ESCR-Net Members and partners who are litigating ESCR cases.   Because the Strategic Litigation Initiative’s primary focus is supporting cases for potential litigation under the OP-ICESCR, this informal group of lawyers is being developed to provide additional legal advice and input as possible on a wider array of ESCR cases.

ESCR-Justice is a monthly update, circulated in English, French and Spanish, highlighting an important economic, social or cultural rights (ESCR) case that has been added to the Caselaw Database. To date, ESCR-Net has produced 31 editions of ESCR-Justice, which can be found here.  The new cases disseminated since the last newsletter include: (1) the Dorothy Ann Finch case in the US, which affirmed that financial concerns do not justify restrictions on immigrants’ access to health (Issue 30, decision delivered on January 2012); (1) Decision T-841 in Colombia, which recognized abortion as a fundamental right (Issue 29, decision delivered on November 2011); (3) the Langaville Informal Settlement case in South Africa, on informal households’ access to water (Issue 28, settlement final on December 2011); (4) the Pro-Huerta case in Argentina, on the World Bank and the right to food in a context of economic crisis (Issue 27, decision delivered on December 16, 1999); (5) Prakash Mani Sharma v. Ministry of Women, a Nepali case on court guidelines for the protection of women’s right to work (Issue 26, decision delivered on November 28, 2008); (6) the Garissa case in Kenya, on the right to housing against illegal evictions (Issue 25, decision delivered on November 16, 2011); and (7) Alyne Silva Pimentel vs. Brazil, the first case on maternal mortality analyzed by the CEDAW Committee (Issue 24, recommendations issued on July 25, 2011).

We hope that ESCR-Justice will support activists and advocates to stay abreast of important developments in ESCR litigation and promote exchange of litigation strategies across regions and jurisdictions that are often separated by language and distance. ESCR-Justice is also intended to encourage discussion of crucial challenges for ESCR advocacy and effective legal strategies for claiming economic, social and cultural rights.

The ESCR-Justice: Monthly Case Law Update and the ESCR-Net Caselaw Database on Economic, Social and Cultural Rights Related Jurisprudence, Cases and other Decisions (see below) are guided by the following organizations:

For more information on how to get involved, please contact Daniela Ikawa, at dikawa@escr-net.org. To share information or strategies with other ESCR advocates, please subscribe to the Adjudication listserv.