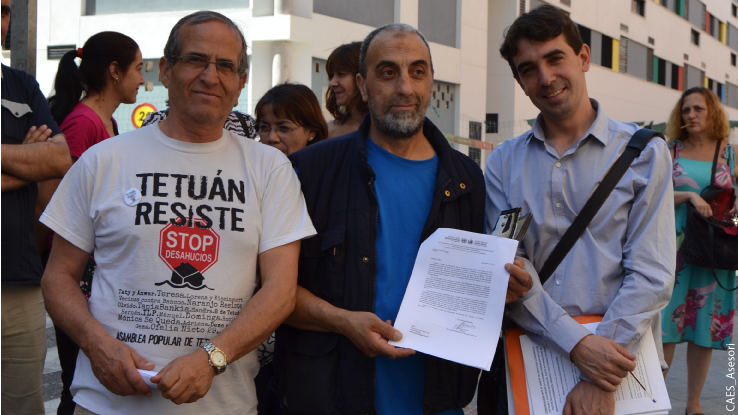 2015 press conference to announce the admission for processing by the UN of the complaint against Spain for the eviction of the family of Mohamed Ben Djazia. Photo: CAES_Asesori

The UN Committee on Economic, Social and Cultural Rights found Spain in violation of the right to adequate housing under the International Covenant on Economic, Social and Cultural Rights. The decision confirms that any eviction of tenants from private rental accommodation must comply with the right to adequate housing, particularly in contexts of vulnerability. Further, states must be able to justify broader measures impacting on the right to housing, including sales of public housing stock and the application of tax revenue.

Date of the Ruling:
Jun 20 2017
Forum:
The UN Committee on Economic, Social and Cultural Rights
Type of Forum:
International
Summary:

In October 2013, Mohamed Ben Djazia, Naouel Bellili and their two minor children were evicted from the home they had rented in Madrid, Spain, after their private rental contract expired. Spain was then experiencing a devastating economic crisis with high levels of unemployment, and this had affected the Ben Djazia-Bellili family, leaving them unable to pay rent for some time. Mr. Ben Djazia had repeatedly applied for social housing for well over a decade and was denied each time. The family situation of uncertainty, extreme insecurity and vulnerability was aggravated by the fact that their children (approximately one and three years old at the time) were left without shelter.

After exhausting domestic remedies (i.e. pursuing all reasonable legal remedies at the national level), the Ben Djazia-Bellili family, represented by Javier Rubio [Centro de Asesoría y Estudios Sociales (CAES)] (Authors), argued before the UN Committee on Economic, Social and Cultural Rights (CESCR) that the state had violated their right to adequate housing under Article 11(1) of the International Covenant on Economic, Social and Cultural Rights (Covenant), since they were evicted despite not having alternative accommodation and without consideration of the impact of the eviction order on their children. The Authors further alleged that the court proceedings that concluded with their eviction did not observe judicial guarantees, for example, courts do not assess the effect of forced evictions on lessees or the particular circumstances of each case. In addition, the Authors contended that relief measures for persons on very low or no income are insufficient to protect the right to adequate housing, given the repeated state denial of social housing support over the long-term and a lack of emergency support in the short term despite knowledge by the authorities of the particular situation.

On 20 June 2017, the Committee held that, “in the absence of reasonable arguments on the part of the State party regarding all the measures taken to the maximum of its available resources, the authors’ eviction, without a guarantee of alternative housing by the authorities of the State party as a whole, […] constituted a violation of their right to adequate housing." The Committee found a violation of Article 11(1) read separately and in conjunction with Article 2(1) (obligation to adopt measures to the maximum of available resources towards progressive realization of rights) and 10(1) of the Covenant (obligation to provide the family with the widest possible protection). In doing so, it referenced its existing guidance to states, including General Comment No. 7 (on forced evictions) and General Comment No. 4 (on the right to adequate housing).

CESCR highlighted positive obligations of the state to protect the right to housing even where the eviction is justified (for example, in the case of “persistent non-payment of rent” or “damage to rented property”). In such cases, certain conditions need to be observed, which include access to effective judicial remedies, genuine prior consultation with affected individuals, consideration of alternative options, assurance that no other rights will be violated as a result of the eviction, special protection to vulnerable groups and reasonable measures to provide alternative housing.

In considering the respondent state’s justifications regarding the lack of access to alternative housing, the Committee noted that, in this case, the state had an even greater duty to justify the outcome since minor children were negatively impacted. In addition, CESCR underscored that that the “lack of housing is often the result of structural problems, such as high unemployment or systemic patterns of social exclusion”, which the authorities must resolve through an appropriate, timely and coordinated response. Referencing its 2016 statement regarding public debt and austerity measures, CESCR condemned the sale of public housing stock to private investment funds by regional authorities at a time when there was increased need for social housing, stating that “[i]n times of severe economic and financial crisis, all budgetary changes or adjustments affecting policies must be temporary, necessary, proportional and non-discriminatory.” Finally, while the family had been offered a couple of alternative housing options, the Committee recognized that these offers would have split up the family, in violation of Article 10.

CESCR issued individual recommendations requiring the state to ensure that the family has access to adequate housing, as well as financial compensation and legal costs. CESCR also issued general recommendations to Spain with regard to: (a) the adoption of legislative and/or administrative measures to ensure that tenants have access to judicial proceedings where the “judge might consider the consequences of eviction…”; (b) the adoption of measures to resolve the “lack of coordination between court decisions and the actions of social services”; (c) the adoption of measures to guarantee that evictions of those without the means to obtain alternative housing involve “genuine consultation” and essential steps regarding alternative housing; (d) special protection for those who are in a situation of vulnerability; and (e) the development and implementation of a plan to “guarantee the right to adequate housing for low-income persons”.

The Spanish government is required to submit to the Committee, within a period of six months, a written response outlining implementation measures, and to publish and disseminate the decision widely, in an accessible format. In accordance with CESCR’s guidance on follow-up to Views, the Authors and civil society organizations/National Human Rights Institutions may then also submit information related to implementation to the Committee. Observatori DESC, a ESCR-Net Strategic Litigation Working Group (SLWG) member based in Spain, the lawyer on the case- Javier Rubio (CAES) and one of the main housing rights movements in Spain, [Plataforma de los Afectados por Hipotecas (PAH)], alongside other allies, are currently leading collaborative efforts to monitor and advance implementation of the case.

The Special Rapporteur on adequate housing also submitted a third party intervention in this case.

This is the third decision on the merits under the Optional Protocol to the Covenant, and the second one on the right to adequate housing (following IDG v. Spain, CESCR, 2015). This case confirms that the right to adequate housing vests in all persons, including persons living in rental accommodation, whether public or private, and highlights the importance of special protection for vulnerable groups. It also reaffirms the need for states to justify the reasonableness of relevant measures, pursuant to Article 8(4) of the Optional Protocol and CESCR 2007 Statement on Maximum Availability of Resources. .

In addition, this case highlights systemic issues regarding the right to adequate housing in Spain, exacerbated by the economic crisis and related austerity measures. As housing problems in most EU countries reach crisis point, this decision is a strong and timely reminder that states have a clear obligation to justify any sale of public housing stock to investment companies, as well as the use of tax revenue in light of Covenant obligations. It also highlights the need for comprehensive plans related to housing, which should provide for necessary resources, indicators, time frames and evaluation criteria.