On Sunday June 22 POSCO Pratirodh Sangram Samiti (PPSS) and other groups observed "Black Day" in Patanahaat village in Odisha’s Jagatsinghpur district, to protest against the proposed mega steel project in the state of Odisha. The MoU between Posco and Odisha government was signed nine years on this day in 2005. 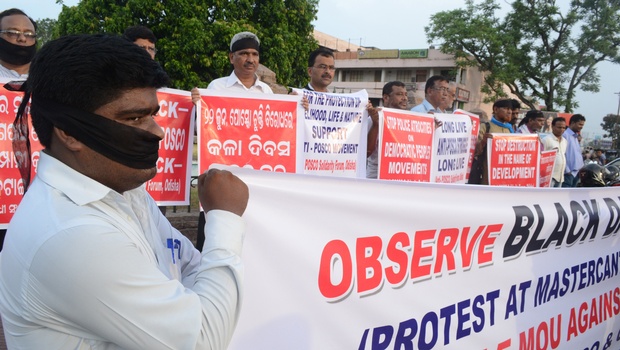 Wearing black badges, protesters staged a rally at Patanahaat village to oppose the mega steel project and demand that the State Government scrap the agreement with South Korean steel giant Posco for its proposed steel plant in Jagatsinghpur district.

For the last nine years, POSCO and the state government has employed countless tactics to sabotage this peaceful social movement, including attacks against on peaceful protesters, illegal and arbitrary arrests, false police cases and ongoing intimidation of grassroots leaders who have expressed opposition to the project.  Anti POSCO groups are determined to continue the fight till POSCO withdraw the project.

In June 2013, ESCR-Net and the International Human Rights Clinic (IHRC) at NYU School of Law launched the report "The Price of Steel: Human Rights and Forced Evictions in the POSCO-India Project" that documents the human rights abuses being carried out to facilitate the establishment of the POSCO-India project, and the associated illegal seizures of land which threaten to forcibly displace as many as 22,000 people in India’s eastern state of Odisha. The full report is available here.