Arpilleras: embroidering the resistance in Brazil

The documentary "Arpilleras: embroidering resistance" will tell the stories of five women affected by dams in five Brazilian regions. Entire lives flooded by the development discourse. The narratives, even though personal, has in common denounces against the predatory logic of the electric companies, present across the country. Entire communities are faced with the denial of the right to information, land and memory. For women, the rights violations are even greater. With the arrival of thousands of workers in small towns where the hydroelectric construction sites takes place, for example, there is an exponential increase in sexual harassment, women trafficking, prostitution and rape.

The film goes in search of these stories to report to the Brazilian and international society the violation of women's rights, especially. And it will also show the leadership and courage of these women in the struggle for rights. From a few hundred kilometers, in Chile, is the example of women from Santiago’s suburbs that transgressed the role of the seam. With clothes of missing relatives, from an embroidery technique, built the "arpilleras", real historical narratives of atrocities committed by the Chilean military, between the years 1973 and 1989.

But how to connect the Chilean resistance to the dictatorship and the organization of people affected by dams in Brazil? The suffering and painof each person are not comparable, but the challenge of becoming the author of its own history can indeed be compared. Since 2013, the arpilleras technique has been used by Brazilian to tell the stories of violations and injustices around dam construction sites. The five women will tell their stories in the documentary and the "seam" will be done by making an arpillera (burlap), which will travel several geographies, representing the drama and the struggle of more than a million people whom have been affectedby dams in Brazil.

Originated in Isla Negra, Chile, the arpilleras served as means of livelihood for women. But the dark days of military repression in the country transformed the embroidery in a real weapon against the government led by Augusto Pinochet. From invisible work to political tool. From a daily work, Chilean managed to become the protagonists of resistance against the dictatorship. This same technique has been rescued in Brazil since 2013 by the Movement of People Affected by Dams (MAB). Through workshops, women from different regions used the seam to tell the violations committed in the construction of dams. Following the strength and power of embroidery, we want to further expand the denounces. For this, we rely on the contribution of all women and men for the realization of the documentary "Arpilleras: embroidering the resistance." 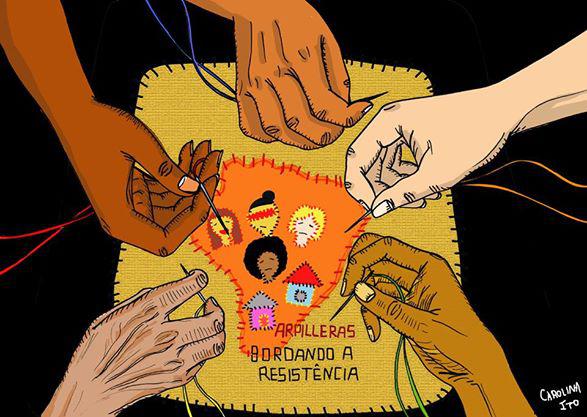 According to the latest estimate from the World Commission on Dams, held in 2000, two thousand dams in the country have been built, which led to the forced eviction of 1 million people. 70% of these people have not received any compensation. The Council for the Defense of the Human Rights of the Secretariat for Human Rights of the Republic of Brazil, recognized in its 2010 report the existence of a standard of systematic violation of 16 human rights towards affected populations within the building of power dams. This emphasizes the serious social inequalities and causing situations of poverty and social breakdown, within the family and individually. The report also recognizes that women suffer even more obstacles to rebuild their livelihoods, they are the main victims of this process of impoverishment and marginalization.

The Movement of People Affected by Dams – MAB, is in the struggle and organization of people affected by dams for more than 20 years defending rights, giving special attention to the organization and political participation of women; seeking how to deal with the imposed violations within the construction processes of a power dam, joining this initiative to build spaces that work the dimension of subjectivity, taking into account that these violations result in traumatic cases of loss of family and cultural ties.

Inspired by the Chilean arpilleristas, women armed with scraps of fabric, needle and thread, which challenged the silence imposed by the military regime during the dictatorship (1973-1989),  MAB began in 2013, a textile documentation process of violations of human rights in dams constructions in Brazil. The result is the formation of a network of about 100 witnesses and textile narratives of women affected in 14 dam areas scattered throughout the country. 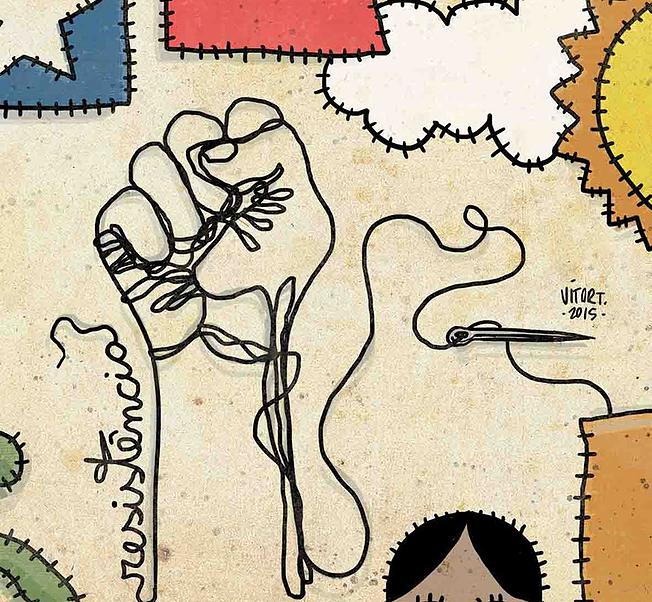 Arpilleras are a textile technique that comes from the Chilean popular tradition. In the '60s, became a symbol of resistance against the military dictatorship of Augusto Pinochet. Violeta Parra once said that "Arpilleras are like songs that paint". Arpilleras are sewed on rustic cloth from flour or potatoes sacks, usually made of hemp or coarse linen. This backdrop, in Chile, gets its name from burlap, giving name to this popular artistic expression. All stitching is hand-made using needle and thread, sometimes added with wool yarn by hand or crocheting to highlight the outline of the figures, as well as three-dimensional elements such as dolls. The dimensions of Arpilleras may vary, but most follow a standard size (60x40cm) being determined by the size of the bag of potato or flour which was used as support, which cut into six parts made possible that the same number of women made their bordasse on their own history.

The particularity of this technique is the political and social context in which they were created. Due to the coup of General Augusto Pinochet on September 11th, in 1973  women from the outskirts of Santiago and rural communities started to make from the arpilleras art a way to give voice to the oppressed classes in the Chilean society. The Arpilleras were produced in workshops sponsored by basic institutions linked to the church, that exported and sold in solidary vacation in Europe and the United States, helping in addition to their release to ensure a source of minimum income for these women. Over time, the Arpilleras have become one of the most poignant and extended visual manifestations of human rights violations, the disappearance of loved ones and opposition to authoritarianism connected to the military regime that ruled Chile until 1990.

Since 2008, the Arpilleras Chilean have traveled the world and inspired other women to register and report their experiences of human rights violations. The Arpilleras produced by women organized in the Movement of People Affected by Dams (MAB) exemplify the legacy of the Chilean Arpilleras who demand life and transform giving voice to other women who shout and fight to have their rights respected.