At request of Movimento dos Atingidos por Barragems (MAB), a group of the National Human Rights Council were in Altamira last week to prove the allegations of rights violations that are occurring with the construction of the Belo Monte hydroelectric plant.

For three days, the board collected many testimonies of people affected, social movements, government agencies and the Norte Energia company, which owns the dam. The mission ended on Wednesday, June 3, with a public hearing in Altamira Convention Center. More than 500 people participated at the auditorium.

The board's mission comes at this moment in which 70% of the dam construction have been completed. Norte Energia is waiting at the moment to receive an operating license, which allows to fill the dam's lake and start its energy generation. "Due to the non-compliance of the conditions, I believe that the Council will recommend the government agencies to not grant an operating license to the company at this moment," said Darci Frigo, one of the board member. 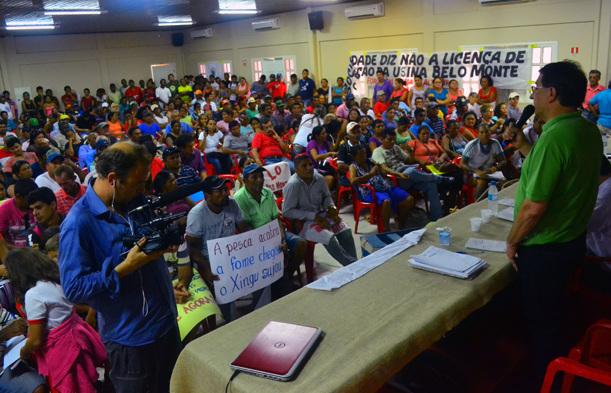 Read the following interview with Frigo, in which he recounts some rights violations caused by Belo Monte

MAB's Communication: How did the coming of the Council to Altamira occur?

Darci Frigo: At the Work-group on People Affected by Dams of the National Human Rights Council we have received a request of MAB informing about the several human rights violations that is occurring against the people affected by Belo Monte. MAB informed about the exclusion of many families of the process of resettlement, compensation and even recognition as people affected by the dam. Besides, we also know that there is a process of criminalization of the organizations that struggle in defense of the people affected. After that, the Federal Public Ministry sent a letter calling on the Council to participate in an inspection, joining two agendas and made a proposal to the National Council, which approved a mission on an emergency basis to come to Altamira and its region to see in loco its situation.

MAB: Why this emergency basis?

Frigo: Because Norte Energia have applied for the operating license, and we believe that if the license is granted at this moment, this will cause the eviction of fisher families, small farmers and riverine population that until this moment have not their rights repaired. Here at the public hearing we have been informed that there is already a countdown at the Norte Energia office and the foresight is that within 90 days the operation licence may be granted.

MAB: Which rights violations were you able to verify here?

Frigo: There are two main issues. One is that: many categories of people affected have not been included in the resettlement or compensation process. The problem of housing affects many people, not only those who are being removed, but also those affected by the high rents due to the construction. Those people that used to pay rent to live, have no longer where to live and that is why they make occupations. The second issue is that, we had imagined that the social investments which the company must fullfil would bring at least an improvement for the public structures, as the public health equipments, schools, security, leisure, sport, infrastructure. But what we have seen is the contrary, the company practically privatized the public hospital and the people do not have access to this hospital. We have received the denounce that there are resettlements being build without schools, heath care facilities, security and without public transport infra-structures. The health situation of indigenous people is very serious, before you had a facility that attended about 60 indigenous people which was well enough and now this same space have to attend more than 200 indigenous people. This means that the health conditions have debased. So our first conclusion is that these social investments have not ocurred in Altamira.

Besides, there is a total absence of the state. The resources that were allocated for the "compensations" due to the impacts of the dam are used without regard to its conditions. For example, the state of Pará bought a helicopter which costed about R$ 40 million with an grant received from Norte Energia of R$ 100 million and this helicopter is not to attend the population of Altamira.

The mayors, what do they do with the money? For instance, the case of Vitória do Xingu, where more than 1000 families are encamped and this municipality have already received an amount of 380 to 400 millions of reais on ISS (Tax over Service) regarding the Belo Monte dam. Where is this money? These are questions that are being made here. There is also absence of the federal government, which emptied the House of Government at local level and the population does not even have that to appeal for.

MAB: What are the next steps of the Council's work regarding Belo Monte?

Frigo: There are emergency measures regarding the demolish of the houses, which Norte Energia needs to stop immediately. I believe that the Federal Public Ministry should take action regarding this issue. We will also manage with the National Agrarian Ombudsman, with the secretariat of human rights to avoid the eviction at Vitória do Xingu, in favor of a negotiated solution and that families may be entitled to housing.

The Board will also draw up a report from the information we have received. There are already indicative for the National Council to present the information collected here in a meeting with the ministries involved in the project and the consortium.

Due to the failure of the conditions, I believe the Council will recommend the government agencies to not grant the operating license to Norte Energia until these conditions are accomplished.

MAB: In your opinion, what is the role of social movements, like MAB, in combating these violations of rights?

Frigo: Social movements should play its role, which is organizing the population, even at this difficult moment, articulating the different groups collectively so that they can pressure Norte Energia, the mayors, state and federal government.

One of the main issues is that people do not have access to the information on the compensation criteria, they do not know what rights they have effectively, why the company decided to pay compensation on value “x” or “y”, why go to a resettlement and no other place, what will happen to the islands, etc.. So there are many information that need to be demanded from the government by the social movements.

The organizational work is important because the consequences of the dam project on people's lives will go on for a long time. The experience of other hydroelectric projects in the country shows it.

At Belo Monte, even that a number of situations were preseen and have been materialized in the “conditioners”, the consortium is not fulfilling with it, which would improve the living of the affected people.