The Program on Human Rights and the Global Economy (PHRGE) at Northeastern University School of Law held it’s 11th annual Human Rights Institute on December 8th and 9th, 2016. Entitled “Global Justice Goes Local: The Emergence of Human Rights Cities”, the conference brought together over 150 academics, advocates and activists for urban social justice and was organized in collaboration with the national Human Rights City Network. 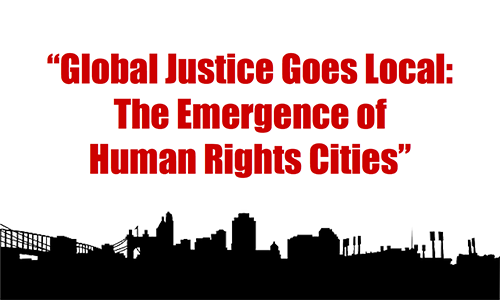 The participants recognized the importance of human rights engagement at the local level in light of the current political transition in the United States and its threats to human rights within and outside of the country, and in particular to certain groups that have been targeted for attacks in the current political discourse. Acknowledging that the federal government’s space for engaging in and protecting human rights will shrink with the coming administration, local efforts will be extremely important.

PHRGE’s Human Rights Institute therefore concluded with the recommendations to local activists by the National Human Rights City Network. The recommendations included: become a Sanctuary City, study and share the US Human Rights Network 2016 Report Card, promote a culture of human rights, speak out against gender-based violence, and connect with people across the world.

Participants remembered Hope Lewis, a tenured scholar, human rights advocate and founder of PHRGE, who passed away during the week of the event after a protracted battle for her health.

Suggested resources from the conference can be found here.