Recalling Yemen’s women: a briefing to the UN Security Council

ESCR-Net individual member from Yemen, Rasha Jarhum, briefed the UN Security Council on Friday November 16th on the impact of the conflict in Yemen on women. In the briefing, Jarhum spoke on behalf of the Peace Track Initiative and the Women’s Solidarity Network, a coalition of 250 Yemeni women and women-led organizations working on the protection of women and peacebuilding in Yemen. 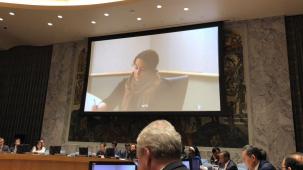 Yemen has been consumed by a devastating war for over four years that has led to a major humanitarian crisis and grave human rights violations.  Nearly 18 million of Yemen’s 29 million people are food insecure as a result of the conflict and the blockade on ports preventing products and food from entering the country. According to the World Food Program, 8.4 million Yemenis  are suffering severe food insecurities, prompting warnings of famine in remote areas in the country where relief agencies have difficulty in access. The situation is especially critical in and around the port of Hodeidah, where the Saudi-led alliance is advancing to take the port city, which has been under Houthi control since late 2014. According to Jarhum, the warring parties continue to disregard international humanitarian law with impunity--in Hodeida, in Taiz, and across the country.

Jarhum described the challenges faced by women who need to travel through rough terrain in the besieged city of Taiz and cross areas controlled by armed groups, in order to provide their families with basic necessities and to protect their men from forced recruitment, abduction, detention, and torture. In these journeys, women are exposed to harassment and risks of violence without enjoying protection.  In other areas in the country, women also suffer for leaving their homes. University students in Sana’a University have been subject to repression by Houthi armed groups, including Houthi women groups, known as Al-Zainabiyat. Women who engage in activism are beaten, electrocuted, and arrested; often released on the condition that they refrain from public activities.

“We, as women, have the highest stake in peace. Members of the Women’s Solidarity Network relentlessly work to end bloody conflicts over water and land resources, to evacuate schools from armed groups, to restore the rights of our sons and daughters to education and risk our lives on a daily basis to rescue families trapped in conflict zones.” Jarhum said to the UNSC.

Demanding an end to the conflict. Jarhum called for a ceasefire and the resumption of the peace process, emphasizing that there will be no just and sustainable peace without an inclusive process. She further recommended lifting the restrictions on ports (which had been imposed by the Saudi-led coalition naval forces in 2017 after shutting down Sana’s international airport in 2016)) and normalizing air traffic in all governorates. a.  She called for protection of children from recruitment, by enforcing a ban and requesting immediate revival of the demobilization, disarmament, and reintegration programmes for child combatants.  (The UN Secretary General reported 842 verified cases of recruitment of boys as young as 11 years old in Yemen in 2017).  Rashum urged the creation of a mechanism to recognize the experiences of rural women and women victims of the war and to ensure that their priorities are integrated into the negotiation process and the political solution. Finally, she called for the enactment of measures to support economic stability, reconstruction and restoration of social services, as well as anti-corruption mechanisms.