A Card before You Leave: Participation and Mental Health (2007)

A community group's campaign to change mental health care policy, using a participatory, “bottom-up” approach to setting human rights indicators and benchmarks defined by group members themselves. The Belfast Mental Health Rights Group—a group of service users, families and carers—identified problems with mental health services in their community they felt needed improvement. In particular, BMHRG was concerned with the health service’s failure to provide timely follow-up care for mental health patients, especially for those at risk of suicide and self-harm.

In 2007, the group conducted a survey and held focus groups in order to establish an evidential baseline and to assess the extent to which these issues affected other mental health service users in their surrounding communities. From this, the group identified human rights indicators around which to set benchmarks and specific timelines for change. This enabled them to make concrete recommendations to the government on progressively realizing the right to health. BMHRG presented these indicators and benchmarks, as well as the results of their surveys, to an international panel of human rights and mental health experts in November 2007. The panel validated the human rights benchmarks as a reasonable and necessary timeline for change in accordance with human rights standards. This formed the foundation of the group's advocacy campaign, which included:

In late 2008, the Minister of Health formally committed to adopting a “card before you leave” appointment scheme across Northern Ireland.  An implementation board was set up in early 2009 to oversee the process. The board incorporated indicators for ensuring meaningful community participation in the design, implementation, and monitoring of the scheme into their terms of reference. These indicators became an important tool for BMHRG in demanding more than tokenistic involvement with the board. With sustained pressure from BMHRG, the scheme was finally put in place across Northern Ireland in December 2010.

"Human rights indicators and benchmarks identified through bottom-up, participatory processes offer an opportunity to maximize the benefits of vulnerable groups’ expertise. This expertise is derived from rights holders’ personal experiences with how government policies and systems may fail to meet their needs on a daily basis."

The work of BMHRG illustrates the potential of affected groups to effect beneficial change by translating their expertise into tangible and targeted recommendations that are in accordance with international and local standards. As group member Bobby Duffin explains "we're bringing in knowledge that you just can't get on paper, we're living the experience". Importantly, it also shows how community advocacy can lead to the establishment of more formalized channels for affected groups to continually monitor and measure the success or failure of service delivery. 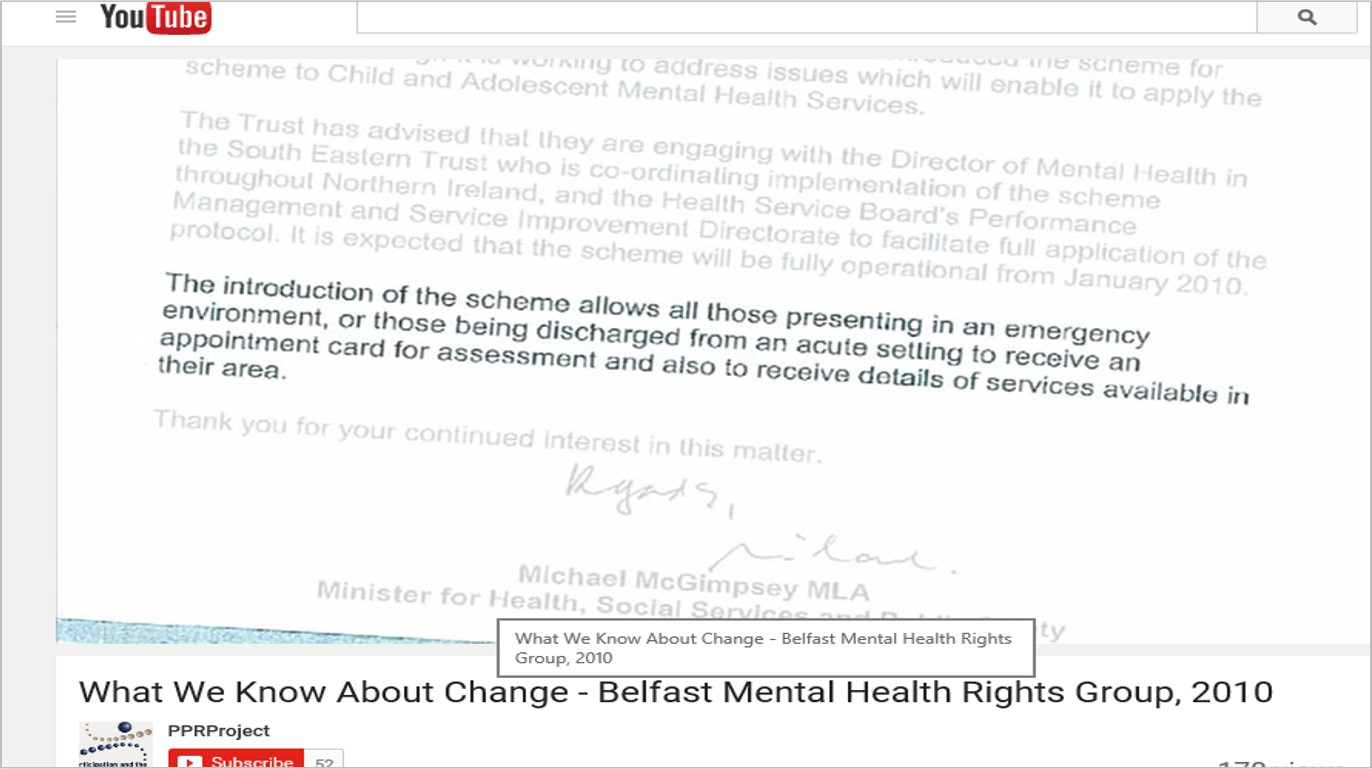