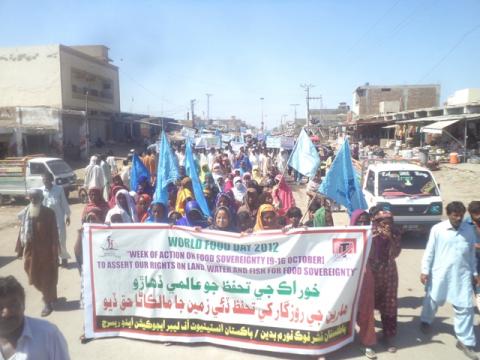 Conventionally, the global discourse on hunger  has been dominated by the concept of “food security;” a concept that was initially coined by the UN Food and Agricultural Organization (FAO) as a way to emphasize access to sufficient, safe and nutritious food for all. However, many advocates of the right to food have argued that the food security paradigm, which promotes food production efficiency and enhanced productivity, leads to the adoption of market-oriented rules governing food and agriculture systems, the dispossession of small-holder producers and environmental destruction. These critics argue, instead, for a “food sovereignty” framework for the global food policy agenda. Food sovereignty advocates argue that, in order to realize the right to food, nations and peoples must have control of their own food systems, including their own markets, production modes, food culture and environments, within democratic processes rooted in localized food systems.

A large number of social movements and grassroots groups - including several members of ESCR-Net – have been campaigning to promote alternatives to neo-liberal policies for achieving food security. The term “food sovereignty” was first made public following an international conference of La Via Campesina, the global peasant movement, in 1996. La Via Campesina promotes the rights of peasants, and the use of small scale sustainable agriculture as an alternative to corporate-driven agriculture. Since that time, demands for food sovereignty by increasingly diverse communities affected by hunger have increased substantially. In Sri Lanka, NAFSO – the National Fisheries Solidarity Movement – promotes food sovereignty by protecting fishing against corporate fisheries, land grabs for large scale tourism projects and other threats.  The Pakistan Fisher Folk Forum (PFF) adopts a similar approach by defending the rights of the fishing communities in Pakistan and promoting the restoration of their historical ownership right in and on the water resources and a national sustainable fisheries policy to protect the rights of the country’s fisherfolk. For these social movements, the objective of the struggle for food sovereignty is to empower fishing communities to become self-reliant and feed themselves. India, Ekta Parishad has waged a long struggle for landless people and those living in extreme poverty to take over the control over livelihood resources, especially land and water. This month, Ekta Parishad initiated the Jansatyagrapha march, a long walk across the country to demand a right to land and livelihood. The mobilization has successfully brought to the Indian government’s attention to need for a comprehensive national land reform.

In the United States, the Coalition of Immokalee Workers (CIW) has worked to improve the inequalities in the food system in Florida and beyond. The farmworker organization had challenged some of the biggest companies in the world and won concessions that have improved the working conditions and secured the living wage of Florida farmworkers - many of whom are immigrants, and are among the most marginalized people in the United States. In their long struggle against the degradation of their lands by oil extraction in Nigeria, the Movement for the Survival of the Ogoni People (MOSOP) has mobilized powerful grassroots demands for the right to their land, including by adopting the Ogoni Bill of Rights. This has been critical to their ability to realize the right to food and to maintain their culture as indigenous people. Access to food sovereignty can also be threatened by big development projects such as dams. The Movimento dos Antigidos por Barragems (MAB) – works to organize people affected by dams in Brazil and to promote development models that reinforce food sovereignty and a healthy environment.

The growing global campaign for food sovereignty reflects diverse contexts and demands, while bringing together common demands for local access to, and control over, food production as the best way to eradicate hunger.