Suspend the POSCO-India project and cease all forcible acquisition of land in Jagatsinghpur District, Odisha

On July 3, 2013, ESCR-Net and the International Human Rights Clinic of New York University's School of Law sent a letter to Naveen Patnaik, Chief Minister of Odisha, India, calling for the immediate cessation of forcible land seizures and the suspension of the POSCO-India project unless and until human rights are respected and upheld. Read the full letter here: 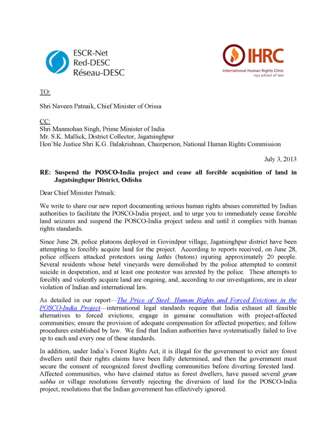 The letter expressed concern at recent efforts by police who have been deployed in Govindpur village, Jagatsinghpur district since June 28 in an attempt to forcibly acquire land for the project, resulting in injuries to approximately 20 people.  These attempts to forcibly and violently acquire land are ongoing, and, according to our recently released report, The Price of Steel: Human Rights and Forced Evictions in the POSCO-India Project, are in clear violation of Indian and international law.

The letter urges the Chief Minister to put an end to these egregious abuses before they become even more catastrophic in scale. It also calls on all competent state and national-level authorities to uphold their obligations under national and international human rights law and: