The International Network for Economic, Social and Cultural Rights (ESCR-Net), a global network of over 220 groups and 50 individual advocates from around the world working to secure economic and social justice through human rights, has requested leave from the U.S. District Court to be recognized as amicus curiae (1) in the case of Lyda et al. v. City of Detroit (2) in support of residents challenging the City of Detroit’s decision to cut off water supply to thousands of households unable to pay their bills. 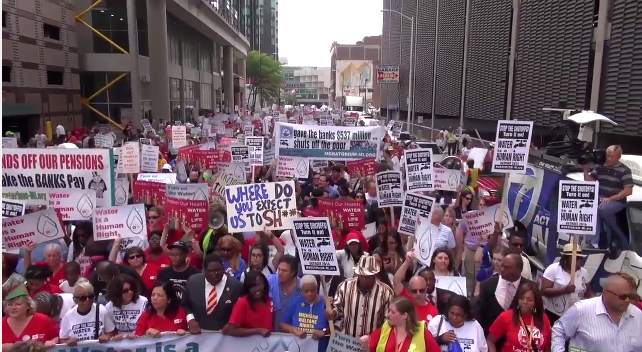 As detailed in the plaintiffs’ complaint, by the end of August 2014 the City of Detroit had disconnected approximately 30,000 households of low-income persons and persons living in poverty from the municipal water supply and sewerage service, leaving them without access to drinking water and water for toilets and basic sanitation.

ESCR-Net, through its amicus brief, seeks to bolster the plaintiffs’ legal challenge by highlighting that the disconnections for inability to pay violate a range of legal obligations applicable to the U.S. under key international human rights treaties.

At the same time, ESCR-Net contends that Detroit’s City Charter, which includes a Declaration of Rights recognizing rights to water, sanitation and decent housing, must be respected. Pursuant to long-established principles of both U.S. law and international law, relevant domestic law must be interpreted consistently with treaty obligations.

Chris Grove, Executive Director of ESCR-Net, said, “Access to justice is required for violations of human rights, and we welcome the opportunity to assist the U.S. District Court with material relevant to consideration of the issues at stake. These issues impact the health, security and human dignity of thousands of Detroit residents and implicate our vision of a just society.”

“A number of human rights are arguably violated by these disconnections, including rights to water, sanitation, adequate housing, health, life, freedom from cruel and inhuman treatment, and non-discrimination. The international human rights obligations of the U.S. also apply to the City of Detroit, and these obligations require that denial of access to water be reversed immediately,” he added.

The City of Detroit’s water disconnection policy has shocked the international community and has prompted, among other reactions, the visit of two United Nations Special Procedures human rights experts to assess the situation in October 2014. (3) Despite the onset of winter, local groups report that the City has continued water shut-offs at the homes of low-income families, the elderly, and the infirmed.

It is hoped that the application of international human rights law will help the plaintiffs achieve a just and effective remedy, including renewed access to water and an end to any further disconnections.

A copy of the amicus curiae brief is available here.

This action is being led by ESCR-Net Strategic Litigation Working Group members Center for the Study of Law, Justice and Society (Dejusticia), the Global Initiative for Economic, Social and Cultural Rights (GI-ESCR), the Social Rights Advocacy Centre (SRAC), and the Socio-Economic Rights Institute of South Africa (SERI).

ESCR-Net has now been granted leave from the U.S. District Court to be recognized as amicus curiae (or ‘friend of the court’) in the case of Lyda et al. v. City of Detroit, in support of residents challenging the City of Detroit’s decision to cut off water supply to thousands of households unable to pay their bills, with the Court acknowledging that the amicus brief is relevant to the case.  The submission outlines the connection between international and domestic law, and references international and comparative material applicable to the interpretation of the various human rights violated by the water supply disconnections.

(1) An amicus curiae (or ‘friend of the Court’) is a person or organization who, although not a party to a case, is granted leave to submit material to the Court relevant to the disposition of the case and not already brought to the Court’s attention by the parties.