Stop forced evictions for the Pope's visit to the Philippines

Defend Job Philippines has launched an urgent online petition in an effort to stop the forcible eviction of hundreds of small-vendors located in and around Luneta Park in Manila, in anticipation of the upcoming visit of Pope Francis to the Philippines. 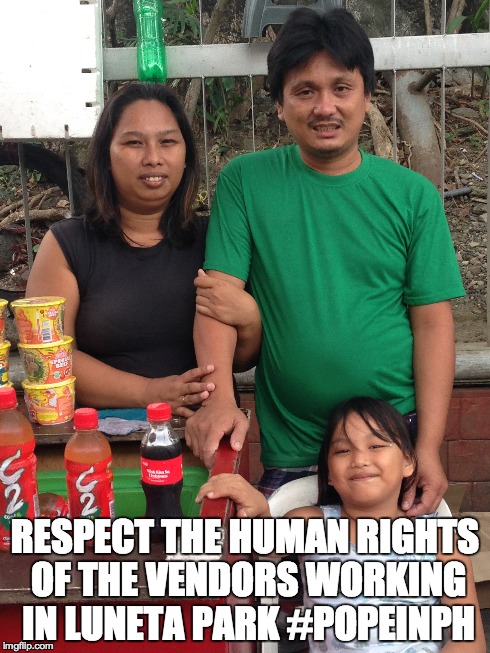 The petition, addressed to the Government of the Philippines, alerted that the proposed removal will constitute the latest in an ongoing pattern of State action of harassment, evictions and the confiscation or destruction of property perpetrated against small-scale vendors in recent years and that these measures have resulted in violations of the right to work, right to food, right to an adequate standard of living and adequate housing, among other human rights, and that their rights will be further violated if the proposed removal takes place

More than 350 vendors have worked in and around Luneta Park where they have sustained their livelihoods selling food and refreshments to the park’s visitors for years. The vendors depend on their ability to sell their products to the park’s visitors in order to sustain their livelihoods, provide food for their families, and earn sufficient money to ensure their children’s ability to attend school. Following a recent announcement that the vendors will be removed from Luneta Park in time for the visit by the Pope, scheduled for January 15-19, 2015, they have expressed serious fears that they will be rendered destitute and will suffer serious difficulties in obtaining sufficient food for themselves and their families, among other impacts.

For more information or current updates on this case, visit here.

Defend Job also encourages those interested in supporting this action to use Twitter to disseminate this campaign: