The International Network for Economic, Social and Cultural Rights (ESCR-Net) is deeply saddened to learn of the recent killing of Berta Cáceres, a dedicated human rights defender who struggled to protect the lands, territories and natural resources of her communities. Cáceres was murdered in the early morning of March 3 in her home in La Esperanza, Honduras, by two armed assassins who broke into her home while she slept. 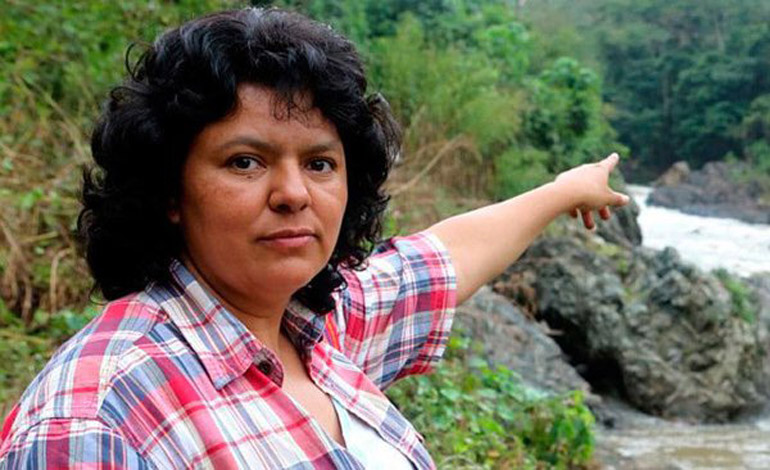 Cáceres, mother of four children, was a leader of the Lenca indigenous people of Honduras who were threatened by forcible displacement and serious violations of their rights to water, food and health as a result of the construction of the Agua Zarca Dam project. The $50 million project was jointly owned by Honduran company Desarrollos Energéticos SA (DESA) and Chinese state-owned Sinohydro, the world’s largest company dedicated to the construction of dams. Thanks to ongoing grassroots opposition by communities who stand to be affected under the leadership of Cáceres and other social leaders, Sinohydro was compelled to pull out of the project.

In recognition of her tireless work to defend the economic, social, cultural and environmental rights of indigenous communities, Cáceres was awarded the reputable Goldman Environmental Prize in 2015. Her case also prompted the Inter-American Commission for Human Rights to issue precautionary measures. Yet, even these notable protections have proven insufficient in the most violent country in the Americas, due to the presence powerful organized crime and a small elite that has benefited from the proliferation of natural resource extraction megaprojects, often at the expense of communities situated nearby.

Sadly, the situation facing Berta Cáceres is not unique. ESCR-Net continues to witness ongoing threats and attacks facing human rights defenders around the world, including grassroots leaders who, like Cáceres, struggle to defend the livelihoods and economic, social and cultural wellbeing of their communities.

The members of ESCR-Net express their solidarity with the family and loves ones that she has left behind, and have pledged their support to the ongoing struggle to defend human rights in Honduras and beyond.