Lok Shakti Abhiyan joined the wider leadership of the National Alliance of Peoples Movements (NAPM) to call on India’s Prime Minister Narendra Modi to respect the right to life and livelihoods of over 40,000 families in Narmada Valley whose homes and livelihoods sources will be flooded by the Sardar Sarovar Dam. A recent petition has been circulated to collect international support for their demands.

On 27 June 2017, approximately 700 women and men representing approximately 70 villages from Dhar and Badwani districts of Madhya Pradesh gathered in Dhar. The protesters had come together to express their rejection of a governmental decision to close of the dam’s gates, which reportedly threatens to submerge the villages of more than 40,000 families. At least 192 villages, and one township comprised of artisans, farmers, laborers and fish-workers, including indigenous peoples will be eliminated by the rising waters; a threat which is further compounded by the onset of the monsoon season in India.

Protestors also condemn the planned submersion of thousands of trees without plans for compensatory reforestation, as directed by the Forest (Conservation) Act of 1980 and related guidelines, as well as thousands of temples and mosques and hundreds of archaeological sites, representing serious environmental and cultural losses. The social movement, Narmada Bachao Andolan, has sustained a mobilization of people who stand to be affected by the dam for over 32 years. 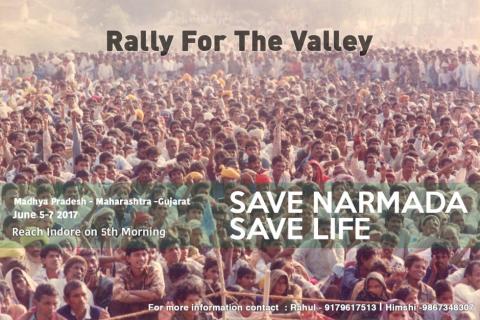 Key amongst their concerns relates to the inadequate rehabilitation and resettlement of many of the dam-affected people prior to their eviction; a condition which was attached by India’s Supreme Court in a February ruling.  According to social movements involved in the case, resettlement and rehabilitation sites are far from complete, and thousands of families are presently living without basic amenities like drinking water and electricity, many in homes that tend to become waterlogged during the rainy season. The lack of adequate preparations to resettle displaced families in conditions of dignity has prompted the government to propose building sheds made of sheet metal as temporary shelter for displaced families.

While the government has invoked the need to promote development as a justification for the eviction of the above-mentioned residents, Lok Shakti Abhiyan and the wider NAPM decried the fact that Madhya Pradesh will not benefit from an increase in water supply from the project.  Protestors also denounced the intimidation of grassroots human rights defenders, including via the application of India’s National Security Act by the Chief Minister of Madhya Pradesh, authorizing the arrest of individuals protesting the dam between 1st July to 30 September of this year.

The petition calls on the Government of India to conduct a full impact assessment of project affected people and the environment; to seek their consent and advice regarding rehabilitation and rehabilitation plans and commit to completing these prior to proceeding with their eviction and to ensure alternative livelihoods options for the residents of Narmada Valley or sufficient compensation.

Following the presentation of their demands, the protesters that had gathered in Dhar, Madhya Pradesh, ended the rally with singing motivational songs in an effort to bolster their resolve in the face of substantial challenges.