ESCR-Net denounces criminalization of leaders of indigenous communities in Guatemala

The International Network for Economic, Social and Cultural Rights (ESCR-Net) sent a letter to the President of Guatemala, Otto Pérez Molina, to denounce the criminalization of human rights defenders from indigenous communities in the department of Huehuetenango. 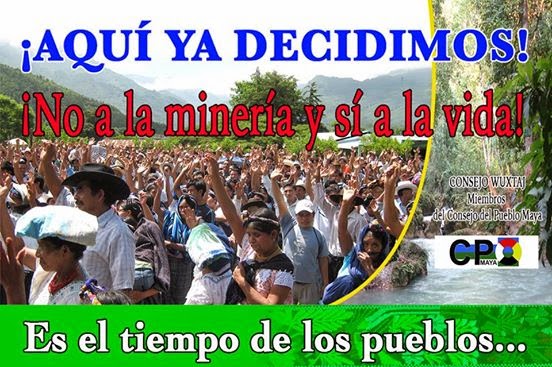 According to information received, on February 26, 2015, three grassroots leaders from Santa Cruz Barillas, Huehuetenango, and members of a peaceful resistance against the hydroelectric projects Qanbalam I y II, were arrested when they appeared before a public hearing convened by the Huehuetenango Court of Justice. This was the latest in an alleged campaign of threats, attacks and harassment by the national police and security companies against opponents of several mega-development projects.

The letter mentions several development projects that have resulted in serious impacts on the human rights of the residents of the area, including the oil exploration and extraction project (run by Loon Energy Corporation of Canada), hydroelectric projects (operated by the Spanish companies Hidralia Energía, Ecoener e Hidro San Cruz), dams (operated by Enel Italia y Grupo Magdalena) and mining projects (like those operated by Firestone Venture Company Inc.).

Chris Grove, Director of ESCR-Net, underscored that “these mining and hydroelectric projects must comply with the fundamental right of indigenous peoples to free, prior and informed consent, the right to live on their lands and ancestral territories and the right to promote a model of development consistent with their values, cultures and worldviews, as established in the UN Declaration on Indigenous Peoples Rights”.

According to information received from the Consejo de Pueblos Huista (Wuxhtaj), an organization of indigenous peoples in Huehuetenango, recently, numerous acts of reprisal have been committed against human rights defenders in the area.

The letter calls on Guatemala to take all necessary measures to ensure a fair trial for the human rights defenders that have been detained and an end to the criminalization of these activists who have worked to promote the human rights of the country’s indigenous communities. The letter also calls on the Guatemalan government to take all necessary steps to design and implement a national action plan, consistent with the UN Guiding Principles on Businesses and Human Rights.