Abahlali baseMjondolo celebrated the conviction of two suspended ANC Councillors, Velile Lutyeku and Mduduzi Ngcobo, together with the gunman Mlungisi Ndlovu, who were found guilty of murdering Thuli Ndlovu by the Durban High Court on Friday, 20 May 2016.

Thuli Ndlovu was an important leader of the shack dweller’s movement of South Africa, serving as Abahlali baseMjondolo Chairperson in KwaNdengezi. 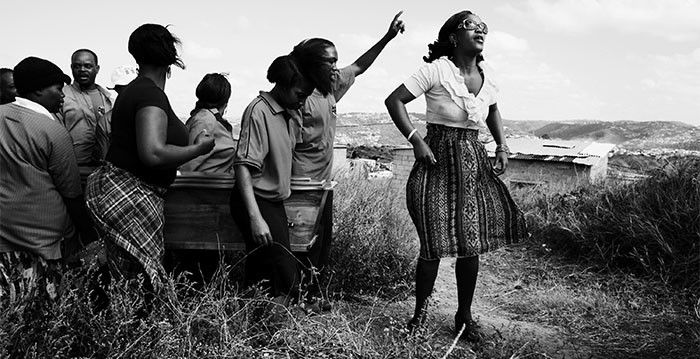 Judge Johan Ploos van Amstel found the accused to be guilty of the shooting death of Thuli Ndlovu in her Pinetown home on September 29, 2014, where she died next to her one-year-old daughter. Her killing came as an apparent reprisal for her work to mobilize communities around housing rights and protested the alleged allocation of government housing to individuals that did not live in the area. The incident was the subject of an urgent appeal issued by ESCR-Net in December, 2014.

Mr. Ngcobo was the branch chairman of the ruling African National Congress (ANC) party in KwaNdengezi, South Africa, while Mr. Lutsheko, who was the secretary of the same branch. The two councillors had been suspended on full pay since May 2015.

In welcoming the judgement as a triumph over impunity, the spokesperson for Abahlali baseMjondolo stated: “We have shown that through organisation and struggle the state can be brought under the control of the people. We will now find closure as we feel justice has been served.”