The source of this optimism was a meeting with Julio Arriola, the Permanent Representative of Paraguay to the United Nations, in which the diplomat committed to advancing the implementation of decisions of the Inter-American Court of Human Rights related to three indigenous communities in the South American country. 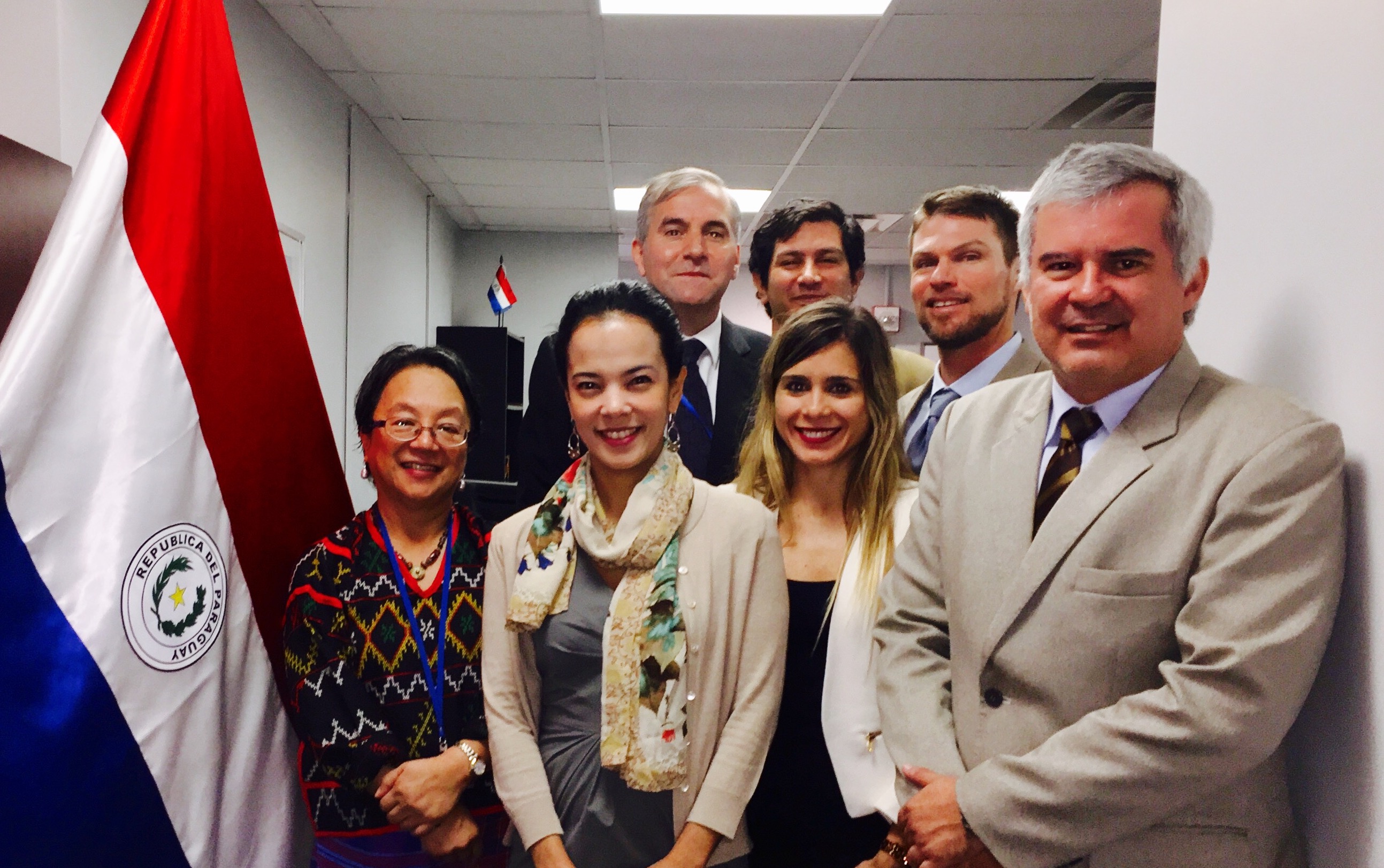 Participants in the meeting with the Permanent Mission of Paraguay to the United Nations.

The meeting with the Permanent Mission of Paraguay to the United Nations took place on 27 April 2017, in New York. Participants included Julio Arriola, Permanent Representative of Paraguay to the United Nations; Victoria Tauli-Corpuz, the United Nations Special Rapporteur on the Rights of Indigenous Peoples; Rodrigo Villagra and Oscar Ayala Amarilla, representatives of Tierraviva; Daniela Ikawa, coordinator of the Strategic Litigation Working Group of ESCR-Net; and Joel Correia, a researcher dedicated to strategic litigation related to the territorial rights of indigenous peoples.

The objective of the meeting – which was requested by Tierraviva and ESCR-Net – was to communicate concern to the Permanent Mission of Paraguay to the United Nations regarding the territorial claims of three indigenous communities in Paraguay (Yakye Axa, Sawhoyamaxa, and Xákmok Kásek). Additionally, Tierraviva and ESCR-Net requested a report summarizing the remaining steps required in order to achieve full compliance with the three positive decisions issued by the Inter-American Court of Human Rights.

The three indigenous communities are still awaiting the full implementation of the legal decisions issued in relation to their ancestral lands. Concretely, concerns were raised regarding the failure to finish the construction of a road to the alternative lands of the Yakye Axa; remaining legal disputes regarding Sawhoyamaxa land titles; and the inability to resolve the claim of the Xákmok Kásek community given that all relevant land has still not been transferred.

Tierraviva also highlighted the lack of financial resources necessary to create community development funds in the three cases. As specified by the Inter-American Court of Human Rights, the funds were to be a reparation measure for immaterial damages.

Victoria Tauli-Corpuz, the United Nations Special Rapporteur on the Rights of Indigenous Peoples, had previously visited the three indigenous communities and issued recommendations to ensure the full implementation of the three cases in her 2015 report entitled "The Situation of Indigenous Peoples in Paraguay". She affirmed that the recent meeting with the Permanent Mission of Paraguay to the United Nations was intended to follow-up on the State’s efforts related to implementation, and acknowledged that she had observed progress following the publication of her report.

Furthermore, Tauli-Corpuz stressed that Paraguay could become a model for other countries if it ultimately completes the important steps remaining to ensure compliance with the rights of indigenous peoples. She also declared that she would congratulate the government of Paraguay if it does indeed fulfill its obligations.

“The State is responsible for the implementation of decisions, but this government in particular has made significant progress, and could offer an important legacy for a positive model of implementation in relation to indigenous communities”, stated Rodrigo Villagra of Tierraviva.

Tierraviva also formulated a demand to the Paraguayan government regarding the creation of an effective legal mechanism related to territorial restitution, which would necessitate the initiation of legislative reforms. In addition, Tierraviva put forward a demand for the Paraguayan government to utilize existing governmental data on indigenous communities in Paraguay, to establish a holistic national development plan for these communities.

For several years, members of ESCR-Net’s Strategic Litigation Working Group have undertaken collective work to advance the implementation of regional decisions related to the right to land in indigenous communities. Efforts have focused on two cases in particular: the one described above, impacting the Sawhoyamaxa community in Paraguay, and another involving the Endorois in Kenya.