On August 10-12, 2016, the Endorois Welfare Council (EWC), with the support of ESCR-Net, organized its first women’s workshop, bringing to Nakuru (Kenya) 25 women from the 16 locations where the Endorois live today.

The workshop marked a second great achievement by and for the Endorois community. The first achievement was the 2010 unprecedented ruling by the African Commission on Human and Peoples’ Rights (ACHPR), that recognized the rights of the Endorois to property, religious practice, culture, development and free disposition of natural resources. The decision also established the government’s obligation to restitute the Endorois land, compensate the community for all losses, pay royalties for activities conducted on Endorois land and begin a dialogue with the community. Since then, supported by a number of partners, including ESCR-Net members Minority Rights Group - MRG International (also the Endorois main legal representatives), Dejusticia (Colombia), Hakijamii (Kenya), Kenyan Human Rights Commission - KHRC (Kenya), and Kenyan Land Alliance -KLA (Kenya), among others, the Endorois have developed a number of projects aimed at pushing for the implementation of the African Commission’s ruling, with activities ranging from community surveys to assess priorities with respect to compensation to community-based workshops and meetings with members of the Kenyan government and the African Commission. 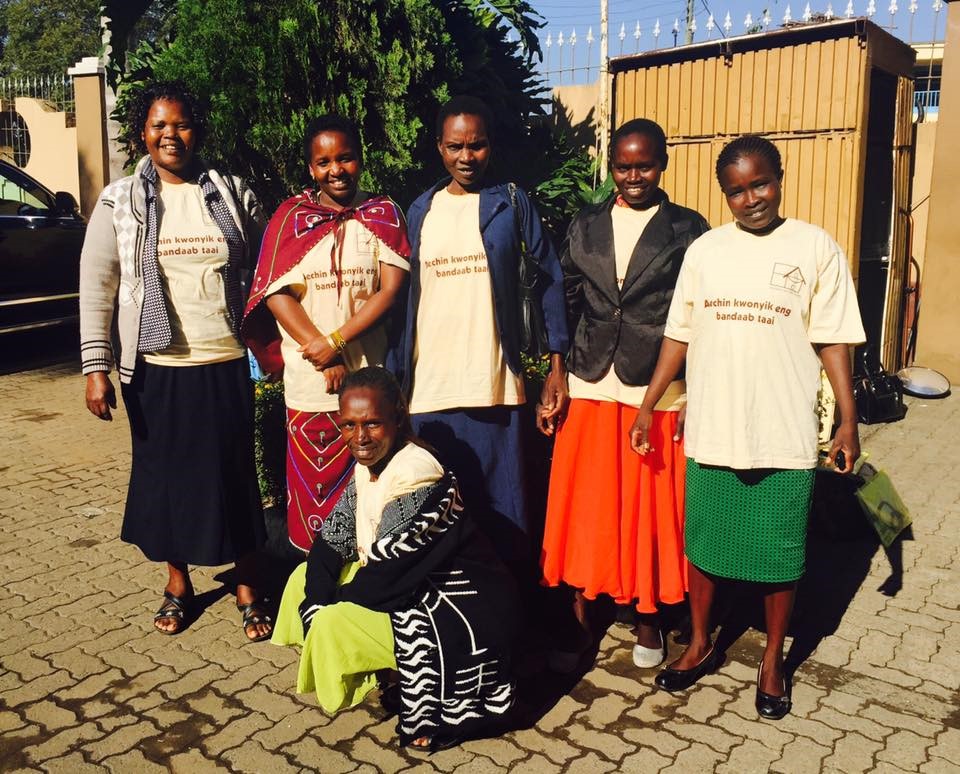 The second major achievement by the Endorois community is that women have started to more actively engage in efforts to advocate for the implementation of the ruling. Following traditional rules and customs, the Endorois struggle for land had been mainly led by men. However, with the support of ESCR-Net members, over the course of the last few years, Endorois women have increasingly participated in efforts to advocate for the implementation of the ruling as well as in the EWC governance structure. The women’s workshop held in Nakuru was the first of its kind within the Endorois community and covered three themes: (1) the main challenges that have prevented women from participating in advocacy aimed at ensuring implementation of the ACHPR ruling and how to overcome these challenges, (2) women’s participation in the EWC governance structure, and (3) women’s economic independence, including as a prerequisite to political and other forms of participation and leadership. The workshop also created a space where Endorois women initiated a dialogue with key EWC male leaders and Endorois elders, proposing concrete ideas about the participation of women in the political sphere of the community.

Concrete demands and the support of male leaders

Endorois women requested key EWC male leaders to ensure that each of the main EWC committees include at least five women paralleling the principle set by the Kenyan constitution for governmental bodies. They also pressed for the inclusion of women as co-chairs of the following committees: compensation, benefit sharing, management and boundaries, and future governance structures, such as a potential community land management committee, that might have to be created in accordance with the Community Land Bill,. Endorois women also identified priorities regarding compensation, recommending a focus on collective, forward looking compensation, which would focus on education, home care for the elderly, improvement of roads to ensure access to schools and hospitals, access to water, improvement of security and dialogue with members of the county governments where the Endorois are located (Baringo, Laikipia and Nakuru county governments).

Participants highlighted that the inclusion of women in efforts towards the implementation of the ACHPR ruling and in the community political structure are supported by several factors. One female participant stressed that women suffered deeply as a result of the displacement. They lost loved ones, as well as access to religious sites, grazing lands, water sources, community bonding activities and education. However, their names have not been registered as potential beneficiaries of land restitution and compensation independently from those of their husbands and fathers. Widows, single mothers (including girls) and divorced women might face even higher hurdles to access resources. Another female participant identified, in this very religious community, that the Bible itself recognized women’s right to property. In Numbers 27, it established that God understood that a father “must certainly give [his daughters] property as an inheritance”, especially if this is a way to preserve the father’s name. Besides, Kenyan law recognizes equality between men and women including in regard to property rights. While customary rules may be applied, the constitution dictates that constitutional law should prevail whenever there is a conflict between the two. Finally, Endorois women can strengthen the fight for the land, by adding new perspectives to the strategic approach adopted by the community and by highlighting community needs that reflect their own day-to-day experiences.

While the women at the workshop identified barriers to inclusion in the implementation process, including strongly established roles based on culture, high levels of illiteracy, lack of unity among women and lack of resources, they affirmed their ability to take on leadership roles. When one of the EWC male leaders asked them whether they were prepared to lead, they responded in unison that they were. When the leader repeated the question and the women confirmed the answer with a high level of certainty, the male leader stated: “then grab your shoes and let’s walk on this journey together”. One of the elders highlighted his belief that women “were able” to lead and that the Endorois “needed to have a woman in leadership”. Another elder, who was already a leading figure at the time displacements took place, shared that the Endorois had a tradition of valuing women, but that evictions had a negative impact on a number of practices. Before displacement, said the leader, “the president of the house was the wife and animals were to be given to the women”. He also stated that he would give land to his daughters. The elder highlighted that the Endorois should “go slowly and in agreement”, establishing implicitly that change is part of their culture, even if community members might differ on its pace. The possibility of change was also stated by one of the female participants, who emphasized that the Endorois should “keep the good culture and get rid of the bad culture”. 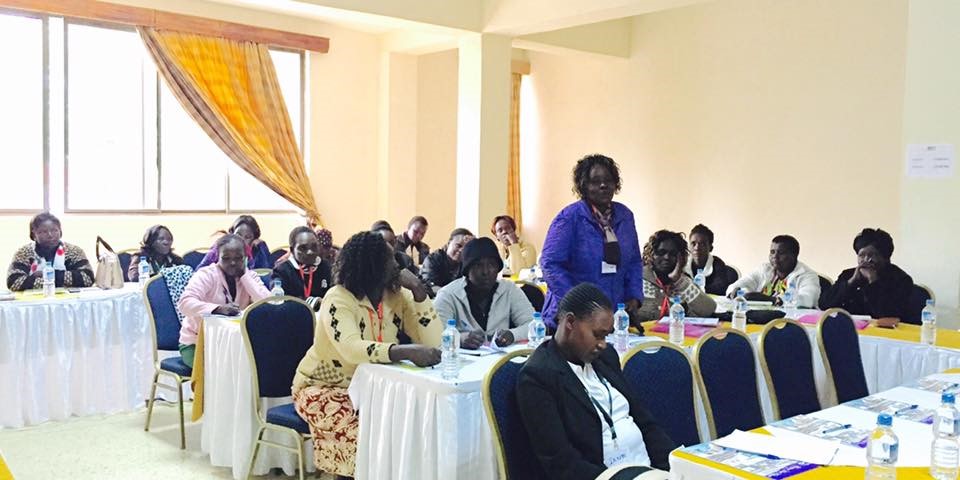 Female participants also addressed more practical challenges for moving forward, such as difficulties in finding opportunities to continue their discussions. Suggestions were made to continue their dialogue in spaces where they usually meet, such as local markets, chamas, and barazas.

Joining forces in the struggle for land

The ten key Endorois male leaders, including elders and the EWC chief, board members and committee chairs, who were invited to attend the final day of the meeting, seconded most of the resolutions introduced by the Endorois women. This opened the possibility of a new phase in the implementation of the Endorois ruling: a phase where Endorois women and men join forces to continue to demand and work towards achieving their rights to land, culture, development, education and health, among others.

A number ESCR-Net members linked both to the Strategic Litigation Working Group (SLWG) and to the Working Group on Women and ESCR (WESCR) participated in the workshop: Dejusticia (Colombia), FIDA Kenya (Kenya), Hakijamii (Kenya), MRG International, and the Ogiek People’s Development Program - OPDP (Kenya). AWID, GI-ESCR, and KHRC were consulted before the workshop and presented a number of recommendations. Finally, the workshop included the participation of women leaders from different communities, including Josephine Nashipae (League of Pastoralist Women of Kenya - LPWK), Naomi Kipuri (former head of the ACHPR Working Group on Indigenous Peoples’ Rights), Stella Kereto (Baringo County Secretary) and Grace Kiptui (Member of the Kenyan National Parliament).

In the 1970s, the Kenyan government evicted hundreds of Endorois families from their land around the Lake Bogoria area in the Rift Valley to create a game reserve for tourism. The Endorois, a pastoralist community, had been promised compensation and benefits by the Kenyan government, but these orders were never fully implemented, and the community's access to the land was restricted to areas allowed based on the discretion of the Game Reserve Authority. This prevented the community from practicing their pastoralist way of life, using ceremonial and religious sites, and accessing traditional medicines. The Centre for Minority Rights Development (CEMIRIDE), and MRG International submitted a claim before the African Commission on Human and Peoples’ Rights on behalf of the EWC in 2003.

In 2010, the African Commission ruled that the Kenyan government had violated the Endorois' rights to religious practice, to property, to culture, to the free disposition of natural resources, and to development, under the African Charter (Articles 8, 14, 17, 21 and 22, respectively). The Commission also established that the government should restitute the Endorois ancestral lands, ensure unrestricted access to Lake Bogoria, pay adequate compensation for all losses suffered, pay royalties regarding existing economic activities, and engage in dialogue with the complainants.  Six years later, the decision still remains to be implemented by the Kenyan government.

Since 2012, the International Network on Economic, Social and Cultural Rights, with the lead of its members MRG International (also the Endorois main legal representatives), CEMIRIDE, Dejusticia (Colombia), Hakijamii (Kenya), KHRC (Kenya), KLA (Kenya), and SERI-SA (South Africa), among others, joined EWC to advocate for the implementation of the African Commission’s ruling:

ESCR-Net SLWG and WESCR plan to stay engaged in this effort to include women in the implementation of the Endorois ruling, both to strengthen the chances of implementation and to further protect women’s rights. Next steps will include the organization of a new workshop in 2017, where specific discussions on political participation in the EWC, economic independence, and inequalities among the women will be addressed.