In a move celebrated by human rights advocates, the UN Committee on Economic, Social and Cultural Rights issued a statement on October 7, 2016 regarding the situation of human rights defenders working to promote economic, social and cultural rights.  The statement followed a broadly circulated sign-on letter which numerous ESCR-Net members joined in May of this year, calling on the Committee to issue a public pronouncement regarding the serious threats and attacks faced by ESCR defenders. 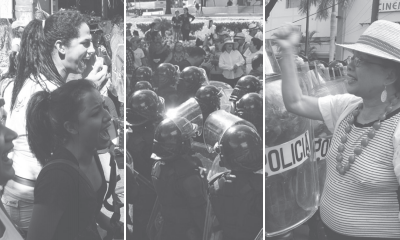 The Statement raises “alarm regarding the situation of human rights defenders working in the field of economic, social and cultural rights,” many of whom face threats as a consequence of their work, and reminds State parties to the International Covenant on Economic, Social and Cultural Rights of their “responsibility to ensure that human rights defenders are effectively protected against any and all forms of abuse, violence and reprisal which they might experience while carrying out their work to promote the realization of these rights.”

The CESCR Statement follows a resolution that was adopted by the UN Human Rights Council in its Thirty-first session on March 21, 2016, which condemns reprisals against and the targeting, criminalization, intimidation, arbitrary detention, torture, disappearance and killing of human rights defenders, for their human rights advocacy and calls on States to combat impunity and “take all measures necessary to ensure the rights and safety of human rights defenders, including those working towards the realization of economic, social and cultural rights.” These, include defenders identifying and raising awareness of human rights impacts, the benefits and risks of development projects and business operations, including in relation to workplace health, safety and rights, and natural resource exploitation, environmental, land and development issues, among others.

Also of relevance, the UN Special Rapporteur on the situation of human rights defenders released a report on 3 August, 2016, regarding the situation of environmental defenders, many of whom are working to promote economic, social and cultural rights. In that report, the Special Rapporteur noted that “As the global demand for natural resources grows,  the  environment  is becoming  a  new  frontline  for  human  rights  and  our  common  future.” The mandate holder observed that activists and communities who are raising their  voices  to prevent  environment damage  and to promote a more sustainable model of development are regularly demonized by their opponents as “anti-development” or “unpatriotic” and noted with concern an increase of 59% in the killings of environmental defenders between 2014 and 2015; the majority of these cases being in Central and South America and Southeast Asia.

The most recent attack against the leaders of a grassroots movement to defend the environment and the economic, social and cultural rights of people living near a dam project in Honduras illustrates the continued gravity of the threats faced by human rights defenders working on the front lines, and the impunity enjoyed by the perpetrators of these threats. ESCR-Net members have voiced their ongoing solidarity, as well as a desire to undertake proactive measures to confront the global forces and structures that perpetuate the violation of economic, social, cultural and environmental rights, and threaten those who risk their lives to defend them.