Members mobilize for human rights in response to the Trump administration

The United States government threatened to systematically undermine the human rights of communities in the US, and around the world, during the first week following the inauguration of President Donald Trump. In the days immediately following Trump’s election, the Media Mobilizing Project (US), National Economic and Social Rights Initiative (US) and Center for Economic and Social Rights (US) issued public statements anticipating serious threats to civil, social, economic and political rights. Recognizing that these threats were global as well as domestic, Juana Kweitel (Conectas, Brazil) joined Anthony Romero (ACLU, US) in writing “A Trump administration is frightening in view of human rights.”

Before Trump’s first week had ended, the Center for Reproductive Rights (US) and other members were challenging an executive order by Trump to reinstate the ‘global gag rule’ and cut access to safe abortion services. The Center for Constitutional Rights (US) denounced the profiling of Muslims, including a 90-day ban on visas to citizens of seven countries, while blocking all refugees for 120 days and indefinitely blocking Syrian refugees. The International Commission of Jurists (Switzerland) challenged Trump’s expressed approval for torture in counter-terrorism operations. Amnesty International (US) confronted violations of indigenous rights implicated in Trump’s push to restart the Dakota Access Pipeline, while EarthRights International (US) emphasized threats to the environment and the livelihoods and rights of affected communities posed by Trump’s efforts to restart both the Keystone XL and Dakota Access Pipelines. The Center for International Environmental Law (US) decried the nomination of Rex Tillerson, long-time CEO of ExxonMobil, for Secretary of State, while Corporate Accountability International (US) challenged the confirmation of fast food CEO Andrew Puzder as Secretary of Labor and started organizing trainings to challenge Trump’s agenda.

Willie Baptist (Kairos: The Center for Religions, Rights and Social Justice, US) offered a reflection drawing on his experience as a grassroots movement leader across different political-economic periods in the US: “After the election: Agitate, Educate, Organize.” On 21 January 2017, over thirty people—including representatives of Kairos and other members—marched from ESCR-Net’s office in New York City, joining thousands and ultimately millions in the Women’s March.  One member marched with the aid of a cane. During the march, he met up with another member representative who had joined with her 10-day-old infant. Friends marched with their 2-year-old daughter, after writing telephone numbers of family and friends on her stomach in permanent marker, just in case they were arrested and separated from her. The diversity of our overlapping identities as members, staff and friends—young and old; gay and straight; from working class and wealthier families; Black, Latina/o, Asian- and European-American; immigrants from several countries; Muslims, Christians, Jews, Buddhists, and atheists—suggested a vision for an inclusive future based on substantive equality and human rights. 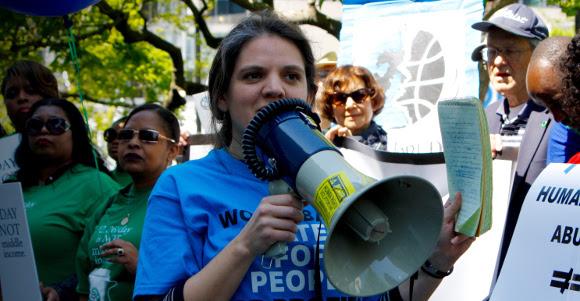 The Women’s March, or any demonstration, is not identical to a sustained movement for change, yet it was significant.  It was global; marches in Ghana, Argentina, the UK, Mexico, Kenya and beyond ultimately drew an estimated five million people, including fellow ESCR-Net members and secretariat staff. One of the protest signs read: “So bad, even introverts are here.” Driven by the political context, perhaps encouraged by friends or family, many who had never protested before felt compelled to take action. For others—who were already on the frontlines of struggles against deepening inequality, marginalization, impoverishment, patriarchy and climate change in every region of the world—the current moment can evoke despair, fear and anger. Yet it was also striking to witness strangers becoming friends and engaging in laughter and song throughout the march. One of our group was part of spontaneous singing on the subway to our office, where we met to share breakfast and make signs.

Core to human rights are convictions regarding the dignity of every human being, their rights to well-being and participation, in a world that can change.  Yet the history of human rights and social justice suggests that the world changes through struggle, through people who come together to insist on their dignity and rights, which are ultimately connected to the rights of every other human.  César Rodriguez (Dejusticia, Colombia) wrote hopefully that “Trump’s victory could push the human rights movement to transform.”  In a related article, Chris Grove (ESCR-Net’s Executive Director) highlighted the Common Charter for Collective Struggle, drafted by the Social Movement Working Group and recently affirmed by the wider membership of ESCR-Net, arguing that “human rights—as a movement emerging from those affected by injustice, actively critiquing systemic inequalities, and affirming our common and interdependent humanity—offers a transformative alternative to a politics of fear and exclusion.”

As one example, on New Year’s Eve, taking up a tradition that united slaves and abolitionists in US history, Kairos joined Repairers of the Breach to hold a “watch night” service in Washington, DC, which called on religious leaders and “people of moral conscience” to take up intertwined struggles against poverty and racism, working to build a new Poor People’s Campaign.  In this and many other ways, multiple ESCR-Net members—social movements and NGOs—are working to unite grassroots struggles and mobilize renewed action to secure human rights.