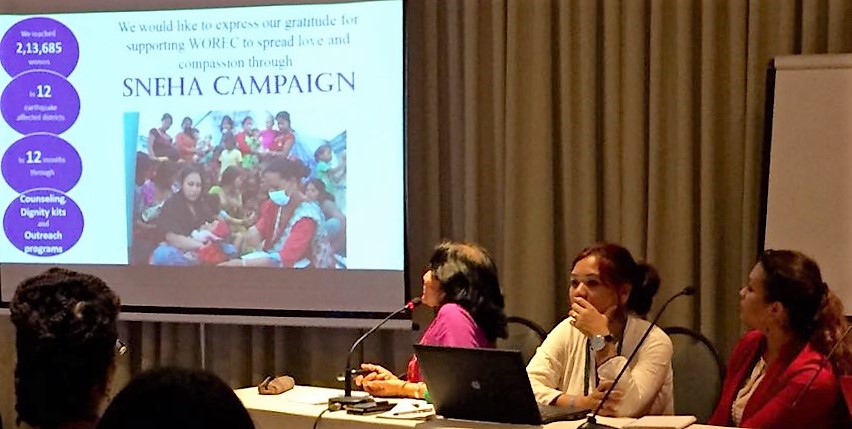 Bindu Gautam, Vice-chairperson of WOREC, during their presentation: “Re-building better society through women’s network: Women’s unique efforts in relief and rehabilitation works after the earthquake in Nepal”

In addition, four members of the Women and ESCR Working Group – Rebecca Brown from the Center for Reproductive Rights (USA), Edurne Cárdenas from Centro de Estudios Legales y Sociales (CELS) (Argentina), Daniela Gorbounova from the Bulgarian Gender Research Foundation (BGRF), and Charlene May from the Legal Resources Centre (LRC) (South Africa) – led a joint session on “Challenging Power through Litigation: Strategies to Realize Women’s Economic, Social and Cultural Rights.” During this panel, they discussed litigation and broader advocacy strategies they and their organizations have used, focusing on the importance of using a variety of advocacy strategies beyond litigation as well as the importance of collaboration to increase the impact of advocacy efforts. 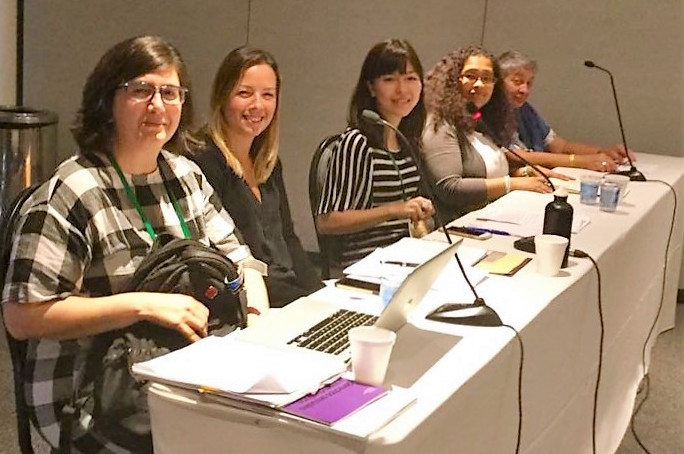 Drawing on its strength as a network organization, each of the presentations complemented one another in providing perspectives on both a range of substantive areas of women’s economic, social and cultural rights as well as diverse advocacy strategies. While these advocacy strategies are all based in a human rights framework, the panelists discussed that they can take forms ranging from, among others, domestic and international litigation to community engagement to fact-finding to working with the media, and that these strategies can be used in conjunction with one another. The panelists also focused on the vital role of advocacy in ensuring implementation of judgments.

More specifically, Rebecca focused on a CEDAW inquiry procedure into a contraceptive ban in the Philippines and the abortion case of LC vs. Peru before the CEDAW Committee, including sharing information about the broader advocacy strategies that supported these cases as well as factors to be considered in making a decision to litigate a case. Edurne then highlighted the ways in which international human rights law has been used in domestic litigation in Argentina, providing the example of efforts to protect and advance the right to an abortion and discussing the challenges confronted in doing so. She described the ways in which litigation has been supplemented with social mobilization efforts. Next, Charlene, discussed the “Mayelane” case, brought by LRC, as an example of how substantive equality can be advanced within the framework of customary law. In this case, South Africa’s Constitutional Court held that customary law had to be developed to require that a first wife’s consent be obtained before her husband married a second wife to ensure that customary law was consistent with the Constitution. Charlene reflected on the case’s impact beyond the successful legal outcome, noting the significance of women impacted by discriminatory laws having the opportunity to publicly voice their experiences on a national platform. Finally, Daniela presented the work that she and BGRF have been involved in over many years with respect to domestic violence cases both at the national level and through a successful case utilizing the Optional Protocol to CEDAW.