On 27 March, 2017, the residents of the Cajamarca region of Colombia, decided by a democratic popular referendum to reject a mining project that threatens an environmentally protected rural area in their region.

The referendum, a figure recognized by the Constitution of Colombia, asked residents of the town of Cajamarca whether or not they were in favor of mining projects and activities taking place in their town. The result showed that 6,165 residents voted No, while 76 voted Yes. There were also 14 null votes, and 41 unchecked ballots, making a total of 6,296 voters. Once 5,438 votes were confirmed, the threshold needed to make this vote binding was met. 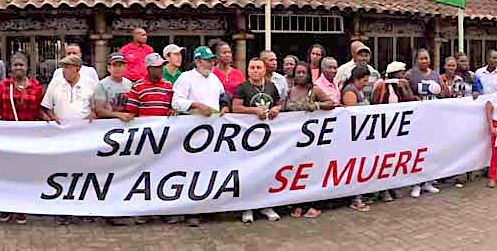 Based on the fundamental rights of participation, and by applying the popular vote as a democratic method, the residents of Cajamarca expressed their rejection of La Colosa mining project that the multinational company Anglogold Ashanti plans to carry out in this protected region.

With their vote against these projects, the Cajamarca community also expressed their rejection of the violations of the rights to water, housing, health and a suitable environment that the construction of the mine was threatening by destroying the land of the farmers and those of small business owners that depend on these lands for their livelihoods.

The Comité Ambiental en Defensa de la Vida, ESCR-Net member, together with other organizations and communities dedicated to the defense of various territories, water and life, welcomes the decision of the people of Cajamarca challenging these mining policies. In addition, it condemns the alleged attempts made by those in favor of the mining project to prevent the required threshold from being met and, in consequence, the result to be considered binding.

ESCR-Net member, Dejusticia, reported in an article that the popular votes are constitutional, binding and do have an effect on mining businesses.

The statutory laws 134 of 1994, and 1757 of 2015, clearly state the obligation to abide by what was agreed to in the popular vote by the people of Cajamarca. While the Constitutional Court of Colombia has been emphatic in expressing the principles of territorial autonomy, and also the capacity of regional or local authorities to determine the use of the land.

The organizations and social movements involved in the vote therefore reject the statements made by the national government and also by Anglogold Ashanti which, allegedly and in their point of view, seek to ignore the results of the Constitutional Mechanism of Participation. They also demand the strict observance of the outcome of the vote, which should result in the issuance of the municipal agreement banning the realization of mining in the town of Cajamarca.

The legal implications of the popular vote and the importance of this topic are explained in a video produced by Dejusticia.

In response to the mining project of Cajamarca, various organizations and social movements claiming a right to land and prior consultation, have been protesting for many years. Many human rights defenders have suffered retaliations, violence and criminalization due to their involvement.

In July 2016, the ESCR-Net sent a letter to the Colombian government expressing their concerns about recurring threats against human rights and environmental organizations in the department of Tolima. They also requested protection, and implementation of necessary security measures for human rights and environmental defenders, to allow them to carry out their work without harassment, persecution, threats, or interference of any kind.