In recent years, coordinated by the Working Group on Women and ESCR, grassroots women leaders have been articulating shared positions and advancing collective action on land and natural resources; most recently, via a second exchange and a series of contributions to the UN Committee on Economic, Social and Cultural Rights.

The second exchange of grassroots women leaders took place in Chiang Mai, Thailand (from 29 July to 2 August), led by ESCR-Net’s Women and ESCR, and the Social Movements working groups with substantive contributions from collective projects on corporate capture, climate justice and community-led documentation.

Building on a first exchange held in Nairobi, Kenya in 2018, the gathering aimed to build solidarity, shared analysis and articulate visions and common demands around land, housing and natural resources. It was also intended to foreground women´s analysis and experiences from affected communities, seeking to substantially contribute to the development of the forthcoming General Comment on land of the Committee of Economic, Social and Cultural Rights (CESCR).

Women shared about those injustices they are confronting, and the forces, powers, actors, narratives they are resisting, in the context of a developing model that commodifies land. Via panels, performances and drawing, participants reflected particularly on those connections between land and corporate abuse (including corporate capture), climate justice, intersectionality in land-related struggles, and documentation, and started to articulate common demands in those realms. Women, land and corporate abuse. Some of the strongest issues shared included how corporations manipulate community, shape harmful narratives and use public security forces to favor their interests and undermine their right to access, use and control land and natural resources, and the disproportionate impacts on women, including the reinforcement of patriarchal structures within the society and marginalizes women even further in decision-making around land. They shared as well about their stories of resistance and the strategies they have or are using to confront these powers.

Women, land and climate justice. Women shared how they are experiencing climate change at their communities, how it is affecting traditional knowledge, their cultural and spiritual connection to land, their livelihoods and health. They stressed how state´s response to climate crisis counters human rights and the meaningful participation of communities, leading to  displacement, evictions and impoverishment. Building on the analysis of members regarding to climate change, participants also shared their visions on what it means to address climate change keeping people and the planet at the center.

Women’s land rights and community-led documentation. Women were asked about what kinds of data they collect and use and the gaps in the kinds of data used for decision-making. Participants also contributed to shaping the collective position on data and ESCR developed by the Monitoring Working Group. They discussed about the principles that should be followed to ensure for gathering and using data about ESCR that better reflects communities’ and women´s lived experiences. Participants also articulated priorities in their communities and struggles to develop further collaborations around community-led documentation.

Intersectionality in land-related struggles. Participants reflected on how intersecting shape their unique way to see and experience the world and their struggles. They also shared about the challenges movements face to embrace diversity, women’s contributions to shape the movement and its demands, and what successful strategies they have put in place to operationalize intersectionality in practice. Likewise, an intergenerational dialogue took place, in which both senior and young women leaders shared successful strategies to bridge generations and strengthen intergenerational solidarity in their struggles, particularly among women.

Consultation with the CESCR. With the presence of Heisoo Shin, a member of the CESCR, women shared their experiences and demands articulated during the preceding days, to inform the forthcoming General Comment on land of the CESCR. This session also informed grassroots women´s participation in the General day of discussion on land, that took place later in Switzerland (14 October, 2019).

The analysis and points of consensus articulated by grassroots women was sent as a written contribution to the CESCR for the General Comment on land. By the end of the meeting, several openings for collective action were put on the table: joining to the Women´s Global Strike, advance articulated advocacy before the UN, bridge grassroots women with women´s rights organizations, disseminate women´s leadership in land-related struggles, advance mutual learning of successful strategies to confront dispossession, and solidarity (especially regarding attacks against women human rights defenders). This meeting will inform the 2020-2022 project on women and land, housing and natural resources.

Day of general discussion on land and economic, social and cultural rights

Read the joint submission by grassroots women leaders to the CESCR

In recent years, ESCR-Net has supported  the development of the general comment on land and economic, social and cultural rights by amplifying a diversity of views from the network’s membership (consistent with ESCR-Net’s guiding principles of regional balance, gender balance and intersectional analysis and the centrality of social movements in collective work). In recent years, ESCR-Net has carried out several consultations to offer input to the CESCR, including coordinating an online consultation in 2016 amongst approximately sixty members, consultations with indigenous peoples’ organizations, fisherfolk groups and women’s rights advocates in 2017 and a written submission in late 2017.

According to the Committee, a draft of the General Comment on land will be published by February 2020, and civil society organizations will be invited to offer written contributions. 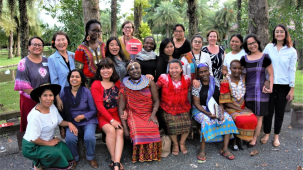